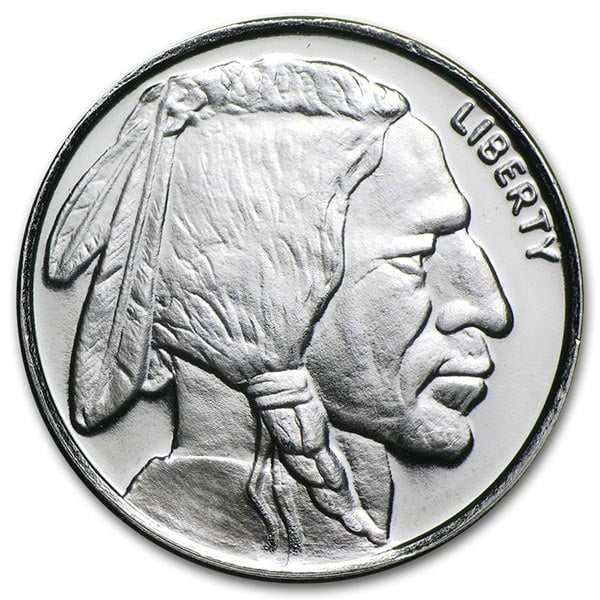 1/4 Oz Silver Rounds Based on the Iconic "Buffalo" Nickel

Money Metals Exchange is pleased to offer .999 pure silver rounds in the barter-ready 1/4 Troy ounce size. These privately minted rounds, which are roughly the size of a nickel, are increasingly in demand.

When compared to silver in coins before 1965, these rounds make a wise alternative. Available stockpiles of Pre-1965 US silver coins can become scarce (and expensive). The Buffalo rounds are beautiful and uncirculated. The silver content is marked on each round, making them value easy to understand and calculate.

They're a great add for any investor looking for smaller denomination silver. The small size makes them ideal for use in barter for lower value items. And it provides the potential for extra appreciation should silver prices move dramatically higher, driving increased demand for fractional silver.

Between 1913 and 1938 the United States minted "Buffalo" nickels. This Buffalo, or sometimes called "Indian Head" design remains one of the most iconic in U.S. minting history. These Silver Buffalo Rounds are modeled after the famous James Earl Fraser design. It's back story makes it one of the most fascinating 1 ounce silver bullion rounds to buy.

Featuring James Earle Fraser’s design of an American Buffalo and a Native American, the American Silver Buffalo Rounds depict some of the imagery associated with America’s rich history. No one really knows who the Native American featured in the picture actually is. Not even the man himself, (Fraser) could give an exact answer.

On the obverse, the Native American is a representation of the people Fraser was surrounded by and the portrait is not of one specific person. On the reverse, the image is of Black Diamond, a bison Fraser met at the zoo. Symbolically, Buffalo’s also mean sacred life and abundance – especially to the Native Americans’ and the image of the Bison has become of the United States’ national symbols. On the round’s obverse, the word ‘Liberty’ reinforces one of the American traditional values it has become famous for.

An American Bison or Buffalo is featured on the reverse. Similar to the Native American, the story behind the picture has been a long debate. Fraser was not 100% sure of the specific type of buffalo he had drawn. He had mentioned that it was none other than the famed American bison Black Diamond from the Central Park Menagerie. (Central Park Zoo) One Bronx Zoo employee suggested that Fraser may have used Bronx, the bison herd leader around that time.

These beautiful rounds are minted right here in the USA. These privately minted rounds offer significant savings versus a government issued coin or numismatic item.

Nice size and weight. Needed some 1/4 oz silver for my collection. Very nice.

This was part of my first silver purchase ever. I researched a lot of companies before I bought. MME seemed like the best and my recent purchase confirms they are outstanding. The ordering process was straight forward, delivery was fast, and silver quality was excellent. They will be my company for all future purchases. Dave M

Money Metals Exchange is my favorite place to buy bullion online! This 1/4 oz Buffalo was a free gift with a qualifying order. Thanks MME. You guys are great!