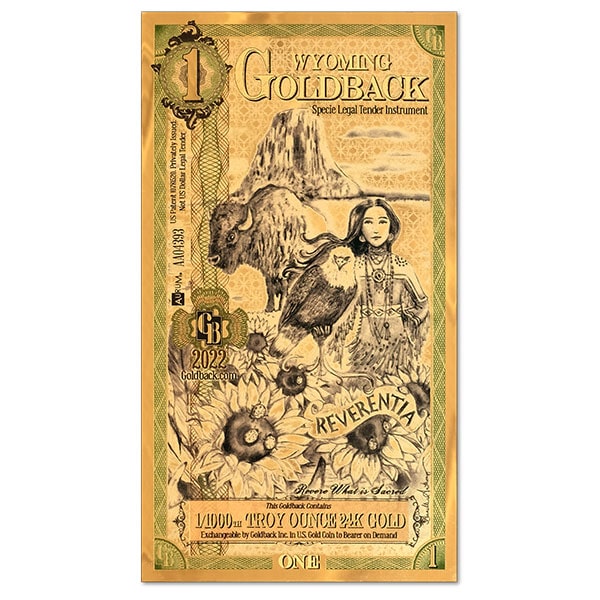 Reverentia, or Reverence/Respect, makes her first appearance in the Goldbacks line of spendable gold bills. She is featured on the Wyoming 1 Goldback Denomination.

Reverentia is depicted as a Shoshone Native American woman wearing a traditional buckskin dress and standing in Wyoming’s Northeastern plains region. The caption below her reads “Revere what is Sacred”. Her hair has been left free to blow in the wind, lending to the overall feeling of freedom. This freedom is reinforced by bald eagle perched on her arm along with with falconry gear.

The bird is a messenger from the Creator, signaling the freedom that people enjoy goes hand in hand with respect and reverence for the Creator of them all.

Reverentia is also surrounded by sunflowers, a representation of life and beauty as a direct result from keeping our face toward the sun, absorbing the light and life that comes from it, and letting it shine through us.

The formation now called Devil’s Tower, or Mato Tipila (meaning Bear Lodge or Bear Rock in the Native American tongue), is in the background. Mato Tipila is a sacred site to many Native Americans in the region. The origin story of its formation involves seven girls, represented in this design by the seven ladybugs on the sunflowers, praying to the Great Spirit to save them from bears that were chasing them. In answer to their prayer, the Great Spirit created the formation, raising them up toward heaven and out of the bears’ grasp. As the formation rose from the ground, the bears scratched its sides while trying to get to the girls, which gave it the markings that we see today. After the girls were raised high enough, they were turned into the constellation of the Pleiades.

Behind Reverentia stands an American Bison, and in the foreground is a bison skull. The bison is a state specific symbol for Wyoming, but it is also a nod to the Tribe Logos of both the Eastern Shoshone and Northern Arapaho. It is a very important animal for the region historically. In this design it represents the strength, abundance, and stability, found in freedom, consistency, and centeredness. The live bison and bison skull are purposefully placed to spark thoughts of the cyclical and symbiotic nature of the life and death  which both come before us and follow after us.

Reverentia, placed in the middle of that representation, further underscores the importance of having peace and respect for that ever present cycle in the now.