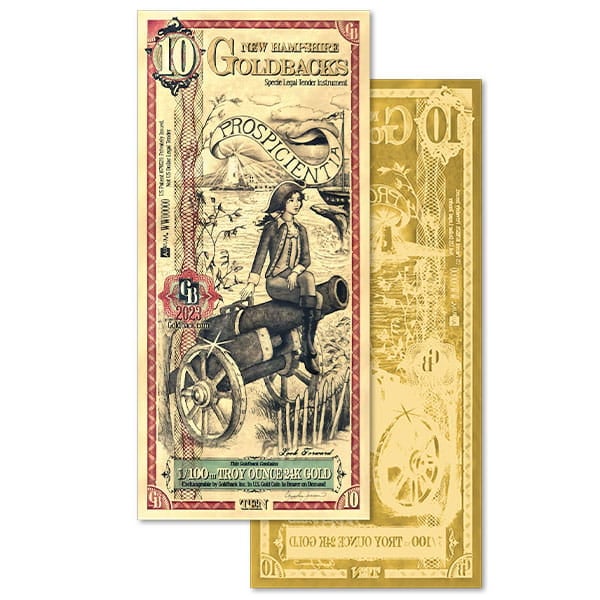 Prospicientia, or Foresight, makes her Goldback debut on the New Hampshire 10 Goldback Denomination.

She is found sitting atop a cannon on the shores of the Atlantic Ocean with Fort Constitution (formerly Fort William and Mary) across the bay. This setting is historically important as it depicts the moments after New Hampshire’s Sons of Liberty took control of the fort.

The effort took place following an earlier, but less famous ride of Paul Revere, during which he warned that General Thomas Gage was coming down the coast and would arrive in a few days to take possession of the supplies at Fort William and Mary. The people of New Hampshire had to do some quick thinking. They knew that it would be a race for the supplies, and that if the British forces reinforced the fort and took possession of those supplies, it would give the British even more advantage in the days to come.

They wanted to stop that, and maybe turn it to the advantage of the Patriots as well. Demonstrating their foresight in a powerful way, they quickly organized and mobilized hundreds of men from the Portsmouth area, gathered more men along the way, and raced down to the fort where they overran the 6 men posted there.

Once they had stormed the walls of the fort, despite facing down 3 active cannons and the musket fire of the half dozen men protecting it, they then took down the British flag, raided the fort of around 100 barrels of gunpowder, and a large number of supplies including muskets, ammunition and 16 cannons! They were able to do all this with less than a day’s notice from Revere and were done several days before General Gage arrived, when he found the fort empty.

This event is arguably one of the first battles of the Revolutionary War, and it is an excellent example of foresight in action. The supplies captured here would be a boon to the war effort and would later be used in many of the subsequent battles.

Prospicientia is depicted with a calm, yet triumphant attitude, because there is peace in being prepared and having foresight to do what is needed before the conflict arises. The caption below her reads “Look Forward.” The design also features the humpback whale, the USS Raleigh - one of the original ships from the Continental Navy, and a variant of the “An Appeal to God” flag that was first flown on George Washington’s naval ships.