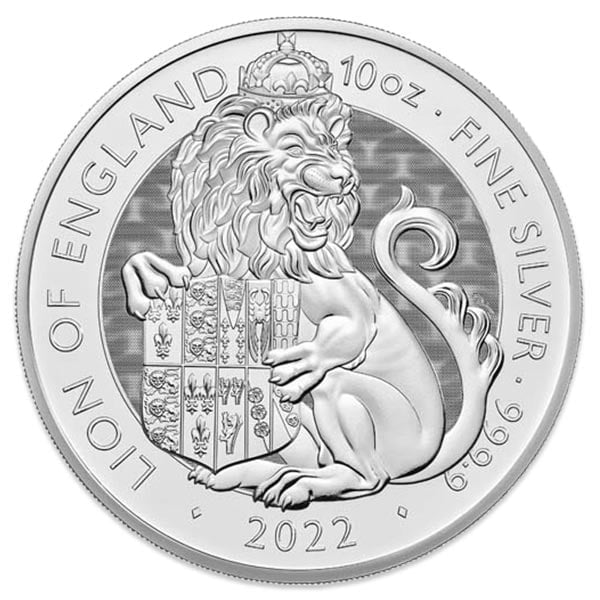 Money Metals Exchange is proud to offer the Lion of England - first in the new Tudor Beasts series. This stunning 10 Ounce .9999 fine silver bullion coin is minted at London's Royal Mint. It is first in a series 10 planned coins. It is a limited mintage from one of the world’s oldest and most famous refineries.

Each hefty coin is denominated as 10 British pounds - legal tender backed by the government of the United Kingdom.

The coin's obverse carries a portrait of Queen Elizabeth II in high relief along with her name and the 10 pound denomination. The reverse features a crowned lion and England's official heraldic shield. The reverse also identifies the coin as "Lion of England" and displays the coin’s weight, purity, metal content, and date.

These silver coins for sale are a whopping 10 times the size of other popular bullion coins for sale, such as the silver American Eagle bullion coin or Canadian Silver Maple. If that isn't enough to make them stand out, the beautiful image of the Lion clutching the shield of the Royal house of Tudor on the coin's reverse certainly will. Each is minted with .9999 pure silver, and denominated with £10 (British pounds). The coins ship from the mint in boxes of 15 coins -- though investors may buy in any quantity, with no minimum purchase.