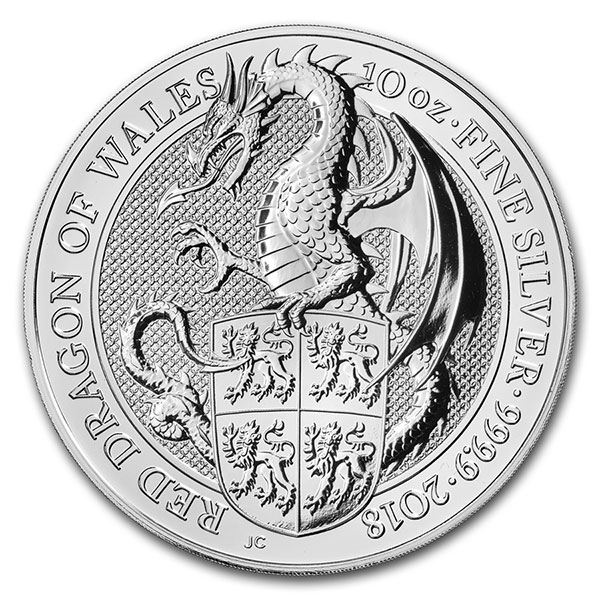 The British Royal Mint's Queen's Beast series of coins for sale has been popular for good reason. The silver coins are larger than usual (sized at 2 ozs and 10 ozs), the artwork is stunning and each design carries a unique historical back story along with a touch of mythology. The 10 oz Dragon epitomizes what the coin series has to offer.

The Queens Beasts pure silver coin is dated 2018, and follows the 2017 release of the 2 oz version of the same design. There are 10 designs planned for the series, with the Dragon being the third release.

At the coronation of Her Majesty The Queen, ten heraldic beasts stood guard. Plaster models were created for the occasion, symbolising the various strands of royal ancestry brought together in a young Elizabeth II, about to be crowned queen.

The coins will each depict one of The Queen’s Beasts, reimagined by Royal Mint coin designer Jody Clark.  Clark also created the most recent definitive coinage portrait of Her Majesty to appear on United Kingdom coins. The portrait is updated to reflect her Majesty’s age - something the Royal Mint had not done since 1998 when Sir Ian Rank-Broadley created the right-profile portrait still in use by some mints. The portrait has been updated 5 times since first appearing on British coinage in 1952.

The Lion of England was the first design to be released in the Queen's Beast silver bullion coin series. It was followed by the Griffin of King Edward III.

This release features the Red Dragon of Wales -- the same symbol which adorns the Welsh national flag.  It is said that Welsh kings first began using the dragon to symbolize their power nearly 1500 years ago.

These stunning coins ship individually sealed in a plastic capsule . A full mint box contains 15 coins (150 ozs.).  Each is denominated as 10 British pounds - official legal tender in the United Kingdom.

The coin's obverse carries a portrait of Queen Elizabeth II in high relief along with her name and the 10 pound denomination.

The reverse features the dragon holding England's official heraldic shield in its talons with its designation as the "Red Dragon of Wales". And the Queens Beasts bullion coin is stamped with its 10 oz weight, .9999 purity and the 2018 date of issue.

The Royal Mint was founded in London and has been producing the bullion coins of the realm for more than a thousand years.

I love my gigantic silver coin!

The British Royal Mint Queens Beast: Dragon – 10 Oz silver coin is the largest silver coin in my collection. It is of highest purity for silver. (.9999 Pure) It is beautiful and very intricate in design and has a reeded edge. As usual, MMX kept me informed via email as to the process of getting the coin to me and did so in a very quick and professional manner. I have been using MMX for my gold and silver investment for years now. I am glad that I have and will continue to do so.