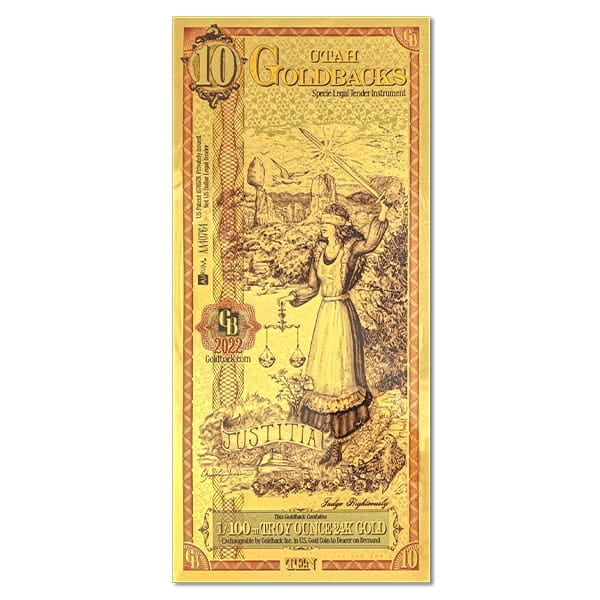 Justitia, or Justice, is the virtue that appears on Utah’s 10 Goldback Design. She is cast in the southern region of Utah, with Balancing Rock and the iconic red cliffs in the background. She is depicted wearing the period settler’s sunday best attire. The scene is set just a few years after Utah was settled.

She is equipped traditionally with a blindfold over her eyes and a two edged sword and scales in her hands, representing the responsibilities of impartiality, fairness, and decisiveness that Justice must use to be right and effective. Below her is the footing: “Judge Righteously”. Note the cross, heart, and anchor on the balances that she carries, which are a nod to the role of faith, hope, and charity in justice as well in order to allow for mercy.

A seagull, the state bird of Utah, flies through the air with a cricket in its mouth ahead of a huge desert storm in the background. These represent two of the miraculous happenings that the Utah settlers experienced in the early years of settling the area. First, when the gulls came and ate crickets that were swarming and eating the crops that the settlers desperately needed. The second recalls the southern Utah desert when a huge desert rainstorm brought the end to a long drought that had been raging across the state after the settlers joined in a united effort of fasting and prayer to be preserved by God.

Both of these symbols nod to the positive side of justice, one of the two sword edges, blessings are as large a part of divine justice as punishment is on the sword’s other edge, though we tend to focus on the latter. In the brush at her feet is a sage hen with twelve chicks, also representing the protection and mercy that justice can bring, referencing the biblical gospels in the imagery.

I have just started buying goldbacks. I didn’t know about them until until Money Metals sent me the information after I made a silver purchase. I typically cannot afford to buy gold, but moneybacks has allowed me to buy small amounts when I can afford it. I think this is a great way to cater to those of us that are not rich, but still want to purchase precious metals. Thank you Money Metals for thinking of the little guy. Money Metals has been a great company to work with. Their product is great quality and is delivered quickly.

Best thing I could have bought.