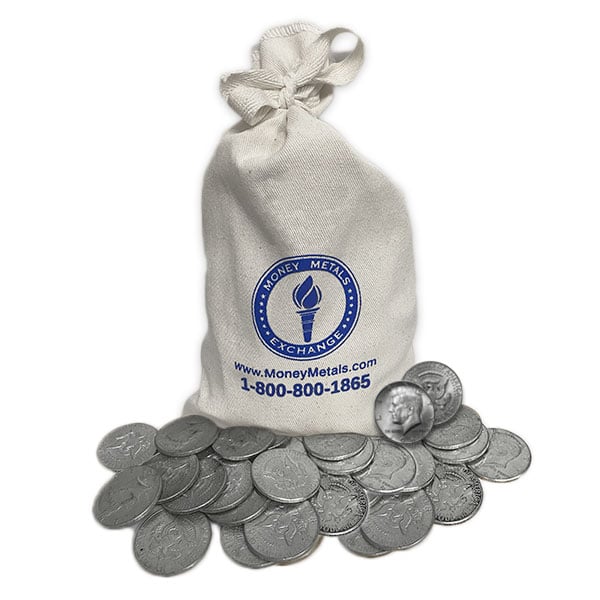 The Kennedy half dollars, or 50 cent pieces, were first issued in 1964. That is also the only year these coins were minted in 90% silver. Production began just prior to the decision to eliminate the silver standard in United States Mint coins.

These circulating coins were designed to honor Kennedy who was assassinated in November 1963. Congress authorized the new design within a month of Kennedy's death and the Mint began production in January 1964.

Kennedy Half Dollar Coins were not very successful in circulation. Americans tended to hoard the Kennedy silver coins, because of the silver content, making the coin values increase. They also felt that the JFK Half Dollars, were a memento of the popular president and therefore considered them to be more of a commemorative coin versus money. Later, the rising silver price resulted in many of these coins being melted and converted to other silver bullion products.

The good news for silver investors is that these Kennedy Silver Half Dollar coins often have less wear than other popular 90% silver coins, which circulated more widely over a longer period of time.

One of the most popular ways to invest in silver bullion coins is buying circulated US half dollars minted prior to 1965. These coins, along with Pre-1965 dimes and quarters, are commonly referred to as "junk" silver, or 90% silver. The term "junk" silver developed in the 1970s. Savvy people began pulling these coins from circulation and trading them at dollar values based on their silver content. Coin dealers applied the term to distinguish this circulated coinage with no collectible value from more collectible coins they wanted to sell at higher prices. Making the coin prices on "junk" silver more appealing to buyers more interested in the silver content, versus the condition of the coin.

Today these coins are widely traded by bullion dealers. They are very popular because they often cost less than other US bullion coins such as US Silver Eagles. Half dollars, which each contain .358 ounces of actual silver content, are also much smaller than the 1-ounce American Eagles. Preparedness minded investors consider official, recognizable US coins in smaller sizes ideal for use in barter. 90% US silver half dollars are anything but "junk", despite being referred to that way.

Silver Kennedy half dollars, the Franklin half dollar, and Liberty half dollars are the varieties these half dollars come in and they have been proven as an excellent store of value. Americans buying gas in 1964 could have purchased 1.667 gallons of gasoline for fifty cents - the face value of one of these coins. Today, these coins have a value which is still roughly equivalent to that amount of gas. The fiat dollar may buy dramatically less, but the purchasing power of silver has held up very well.

These coins are "honest" money. They have worked well to protect investors from the destruction of the fiat US dollar in the decades since politicians and central bankers abandoned the gold and silver standard that once underpinned our currency.

How Much is a Kennedy Half Dollar Worth?

All US silver coins struck in 1964 or earlier were minted with 90% silver and 10% copper. Please note: the copper content of these rare coins is excluded from any calculation of pricing. Only the silver content is valued!

1964 Kennedy half dollar silver coins carry historical interest, but little additional premium is added to their price based on age, condition or collectible value.

Are Silver Half Dollars a Good Investment?

Pre-1965 silver half dollar coins do offer several advantages. First, they are significantly smaller than 1 ounce products, which makes them ideal for bartering in smaller transactions.

Secondly, like bullion rounds, this form of silver can often be purchased at a lower premium over the spot market price of silver. The market value of "junk silver" is often very close to the actual melt value of the coins. Investors can get more ounces of silver for whatever they plan to spend by choosing half dollars in favor of more expensive alternatives.

Thirdly, they are legal U.S. tender, albeit only for the face value of $.50. While it would be a very bad idea to spend these coins for the face value, their status as legal tender backed by the U.S. government does instill a measure of trust and confidence. That could be important when the time comes to sell or trade them.

Finally, silver junk bags are bought and sold in huge quantities and are therefore very liquid - easy to buy and easy to sell.

Silver half dollars are machine counted into bags when a client's order is released to be packed and shipped. Money Metals can accommodate orders starting as small as $5 face value (10 coins). Silver coin bags of dimes and quarters are available in addition to half dollars and are generally priced even lower. Making the cost and the coin values, a great choice for those looking to spend less, yet still obtain silver. Or a great choice for those coin collecting, because you're able to buy them in bulk, giving you a variety of dates.

Purchased several of these...my favorite coin. Believe these are a great investment considering the current state of our Republic. Also brings back memories of my Dad who had a collection and cherished the value of silver.

There is just something about this half dollar that looks and feels right, especially the 1964, 90% silver ones. Just seeing that solid silver reeded edge and the feel in the hand...AH! Several of these looked uncirculated as well! Thank you MME!