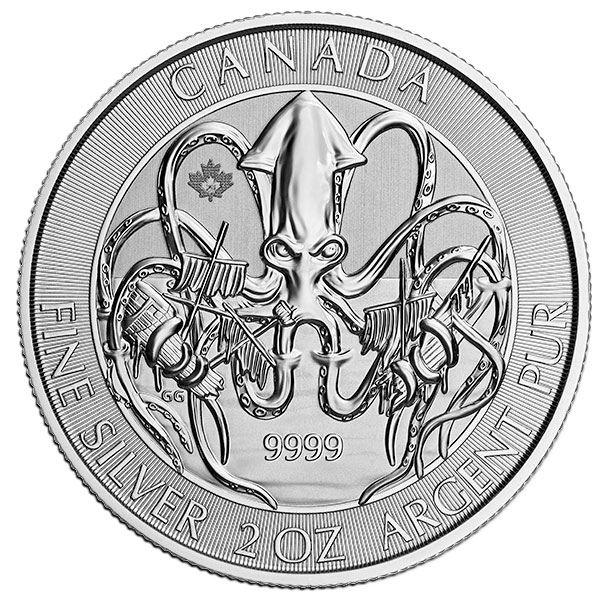 Creatures of the North; Kraken - First in a Brand New Coins Series by the Royal Canadian Mint

For centuries, mariners have reported strange sightings of a massive, ship-wrecking sea monster...the Kraken. The beast is said to be so massive it can be mistaken for an island. Its tentacles are powerful enough to tear a ship in two.

This awe-inspiring creature now glowers fiercely from the face of a bullion coin produced by the Royal Canadian Mint. It is the first in the new Creatures of the North series. The series commemorates the fantastic, and mysterious, creatures of Canada’s seas, lands and skies.

In addition to the striking design that will appeal to any bullion investor looking for something extra special, the Kraken coin also incorporates renowned Mint security features, including the maple leaf lasermark and precise radial lines around the border. And at a full two ounces, the coin is thicker than a standard one- ounce bullion coin, giving it an especially satisfying heft.

New issues in the Creatures of the North series will be released twice a year, so investors should keep a watchful eye out to see which creature will emerge from its lair next!

The Royal Canadian Mint Kraken - In an Impressive 2 Oz Size;

A Myth Shared by Sailors From Around the Globe

Kraken sightings in Canada date back as far as the 1700s, with reports of strange tentacled creatures in the waters off the coasts of Newfoundland and Labrador. Photographs later confirmed something was out there. In 1878, a 17-metre squid washed up in Glovers Harbour in northeast Newfoundland—proving, in a way, the legend was true.

The Kraken continues to hold a special place in maritime lore around the world. It surfaces in stories, films and, now, a pure silver bullion coin.

Advanced engraving techniques bring the full details of a terrifying maritime scene to life—right down to the suckers on the Kraken’s tentacles and the woodgrain of the hapless ship’s planks.

Multiple finishes enhance the contrast between the sky and the murky depths of the sea. Perhaps most striking are the Kraken’s eyes, alive with ominous fury as it tears a three-masted ship apart and drags it to its lair beneath the waves. Looking into those eyes, it’s easy to see why sailors have feared this beast for centuries.

The Royal Canadian Mint Makes a Rare Departure From Reality

The mythological nature of the Kraken sets it apart from the real-world animals usually featured on the Mint’s bullion coins. The departure presented a novel challenge for coin artist Gerald Gloade. With no photographs or specimens to go by, he had to investigate other sources to get the details right. Instead of consulting with zoological experts, Gloade consulted old folkloric texts and The Rooms’ historical archive of Newfoundland and Labrador culture.

I bought this beauty 6 months ago. ( premium was a little bit lower ) since then. I've purchased two more rounds of the same measurements. Does anyone know what they are. 4mm? Is what I believe it is. Anyone can answer that would be much appreciated thank you in advance.

Well, what can be said about the Canadian Mint? How do you get purer than .9999? No way. How about that 2 oz weight? Another point for Canada. And, add to it the beautiful engraving for minting of the Kraken?? Superb. Makes me want to sing the "I'm a Lumberjack" song from Monty Python. Beautiful!!! Add it to your collection.

Beautiful coin. I was very pleased. As always Money Metals service and quality are unmatched! Thank you Money Metals! Hi yo Silver, away!!!!

I don't know if there will be more RCM Creatures released in the future, but the Kraken is a good start. Wait till you can get one in your hands, it's nice looking. I know it may be awhile before these are available again, but do try to get one if you can. --Mr.T.--