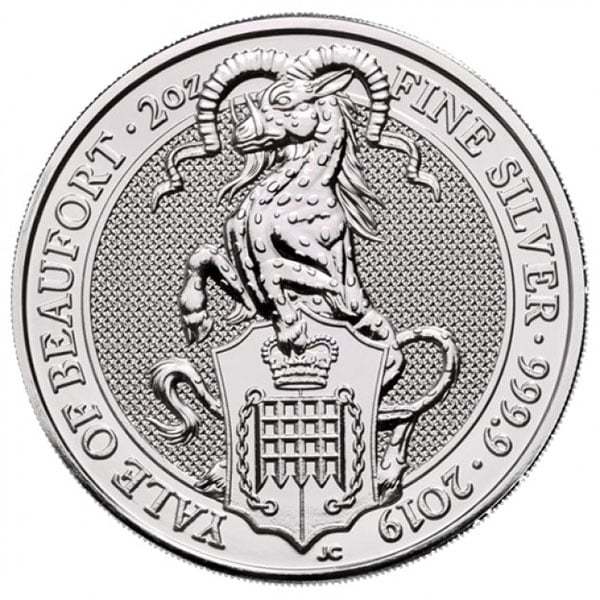 The Yale of the Beaufort in Stunning .9999 Silver

Money Metals Exchange proudly offers the Yale of Beaufort - 7th in the popular Queen's Beast series of coins. Britain's Royal Mint just released this stunning silver bullion coin and the mintage will be limited. When the next coin in the series is issued, production of the Yale will end forever. Buyers should not delay.

The yale is a mythical beast, described as the size of a hippopotamus with the tail of an elephant, the jaws of a boar and of a black or tawny colour. This latest release features another original portrait by Royal Mint coin designer Jody Clark. Regal, rare and magnificent, its most prominent feature is its horns - the focal point in the design.

These silver coins for sale are twice the size of other popular bullion coins for sale, such as the silver American Eagle bullion coin or Canadian Silver Maple. If that isn't enough to make them stand out, the beautiful image of the mythical Yale clutching the shield of Beaufort on the coin's reverse certainly will. Each is minted with .9999 pure silver, and denominated with £5 (British pounds). The coins ship from the mint in boxes of 200 coins -- 20 tubes filled with 10 coins each, though investors may buy in any quantity, with no minimum purchase.

Been doing business here for a while now. Many of these coins not commonly available where I live.MM delivers on time and I can always count my holdings once I order. Four 9 coins, I think, will offer the best collateral value as the demand for silver in high tech industry increases.

Love the Beast Series all are worth collecting. Each a collectors item in themselves .. Highly recommend. Buy as all the others have flown off the shelves .. Get them while you still can. The Yale IS on of the most unique designs. But each have a stunning craftsmanship.