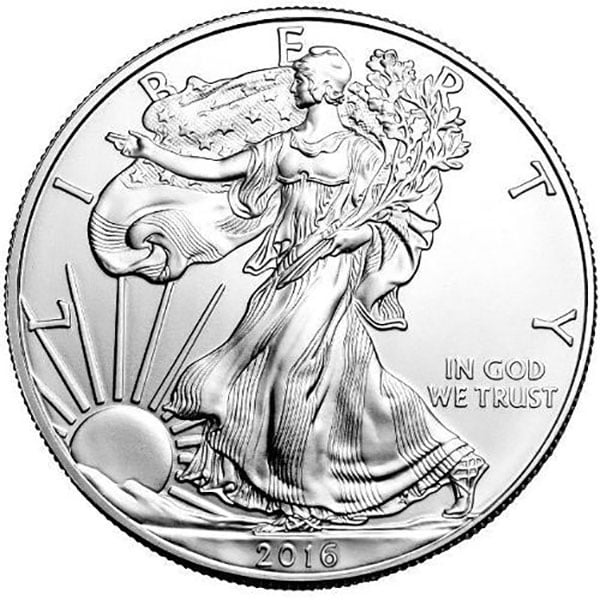 Money Metals Exchange takes pride in providing investors and coin enthusiasts with the opportunity to add the beautiful 2016 American Silver Eagle Coin to their collection. This particular coin is revered for the detailed inscription of the Walking Liberty on the obverse side.

The Composition of the Coin

Valued at $1 (USD) each, every 2016 American Silver Eagle weighs 1 Troy ounce each. This means that every coin contains a minimum of .999 of pure silver. The weight, purity, and content of the coins are backed by the U.S. government.

A legal-tender coin in the United States, the coin is authorized under Title II of public law 99-96 by the United States Mint. It continues to be valued for its design and composition, a frequent find in collectors’ and investors’ portfolios.

The 2016 Silver Eagle coin, not unlike coins minted in the previous years, features the Walking Liberty – an iconic image in the American coining history. The modern depiction of this design is credited to one of Augustus Saint-Gauden’s students, Adolph A. Weinman.

He was chosen in 1915 to give new life to the American silver coin. It depicts the grace of Lady Liberty walking towards the sun, carrying laurel and oak branches and draped in Stars and Stripes.

Engraved on the obverse side of the coin, this design is a representation of the American dream of growth, expansion, and fearlessness for the future. The design on the reverse side matches the glory of the Walking Lady Liberty.

The heraldic eagle as featured on the Great Seal of the United States is depicted on the reverse side of the coin. 13 stars representing the original colonies and the bald eagle depict a strong sense of the American identity. This side of the coin was designed by the U.S. Mint sculptor and engraver, John Mercanti.

The Benefits of Investing in 2016 American Eagle Coins

Despite silver not being the first choice of precious metal investments among the general population, an expert and experienced collector will understand the value and importance of the 2016 American Eagle coin.

While the bullions have been popular among collectors and investors since their initiation in 1986, the 2014/2015 terms have been monumental in the history of silver coin sales as they grew from an estimated $44 million to $47 million in 2015.

These numbers speak of the general interest and importance of these coins among investors. Additionally, the 2016 American Silver Eagle coin is IRA eligible. This makes them suitable for retirement plans.

Money Metals Exchange, a purveyor and expert of precious metals, bullions, and the like, has become the first choice for many looking to invest in 2016 Silver Eagles.

Close to a decade of experience in conjunction with international acclamation and industry expertise gives us an edge to ensure you receive authentic products, fast delivery, and cost-effective rates without any compromise in the quality of service.

If you have further questions about the 2016 American Silver Eagle coin or about Money Metals Exchange, get in touch with us for a consultation.

I wish I had earlier.

I finally got the silver bug. And started to purchase these Silver Eagles. A very fine product.

Luv this coin/round and the prices at the time of my purchases. I will purchase more hoping to collect 2000-2020