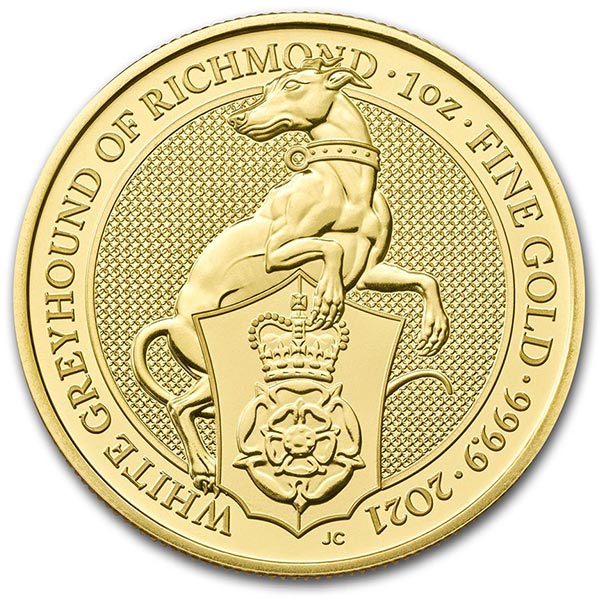 The White Greyhound of Richmond Now Ready to Run in Beautiful .9999 Gold

Money Metals Exchange is now offering the White Greyhound of Richmond - the 10th and FINAL release in the Queen's Beast series of coins from the Royal Mint. London's Royal Mint just released this beautiful gold bullion coin and the mintage will be small. Grab yours today. This coin the last one planned for the popular Queen's Beast series and it will go quickly.

The series commemorates the ten imposing statues that lined the entrance to Westminster Abbey in 1953 at the coronation of Her Majesty The Queen. The statues were of the heraldic beasts - ancient symbols of power representing noble families and houses in the Queen's line of ancestors.

These stunning gold coins are carefully crafted and issued in limited release. If that isn't enough to make them stand out, the beautiful image of the White Greyhound and shield of Richmond on the coin's reverse certainly will.  Each is minted with .9999 pure gold, and denominated with £100 (British pounds). The coins ship from the mint in boxes of 100 coins -- 10 tubes filled with 10 coins each, though investors may buy in any quantity, with no minimum purchase.

This coin is beautiful and was shipped fast.