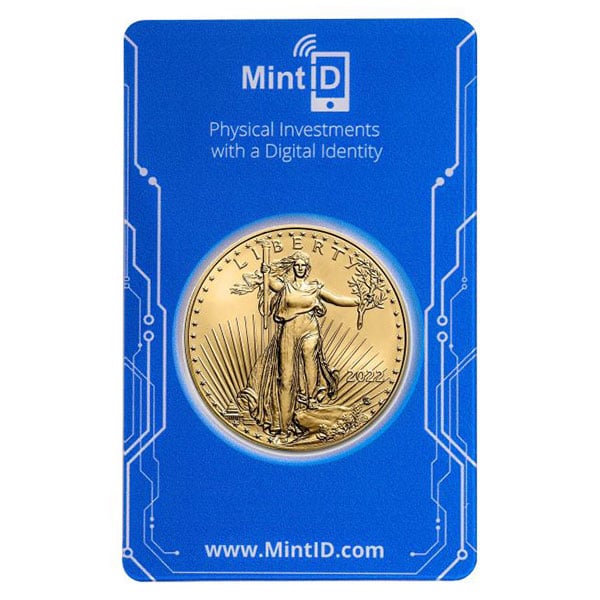 Each gold American Eagle coin is removed directly from sealed mint boxes and immediately encapsulated within the MintID NFC enabled holder. Utilizing the MintID app each Authenticated Bullion Gold product can be instantaneously authenticated providing real-time specs of the product.

Each MintID holder contains several anti-counterfeiting features that includes tamper revealing security film and printed luminescent patterns only visible under UV light. Backed by the MintID guarantee and authenticated through the MintID encrypted database MintID coins are the most secure and protected bullion products on the market.

The Most Popular Gold Bullion Coin In the World

Money Metals Exchange is pleased to offer MintID security combined with the gold American Eagle coin in the 1 oz size. This beautiful coin has been produced by the U.S. Mint since 1986. Each Gold Eagle's Value is based on its gold content, but it also carries a legal tender value of $50 US (1 oz). The Golden Eagle's weight, content, and purity are guaranteed by the United States Government. While Gold American Eagle coins contain a full 1 troy ounce of gold, the alloy is 91.67% gold (22 karat), 3% silver, and 5.33% copper.

Here is more about the product, specifications, and purchase price:

The front (obverse) of the gold bullion coin looks similar to the 1907-1933 twenty-dollar gold coin and its depiction of a robed lady Liberty, designed by Augustus Saint-Gaudens.

The back (reverse) of the coin is adorned by a family of eagles, and the words “United States of America”, “In God We Trust”, “E Pluribus Unum”, the face value, and the gold weight of the coin.

American gold coins were originally authorized by the Coinage Act of 1792 and served as coins of the realm until 1933. They were removed from circulation by Franklin Roosevelt’s controversial executive order which lasted until 1972.

President Nixon rescinded Roosevelt’s executive order which banned private ownership of gold bullion at the same time as he slammed shut the “gold window”. His action removed the last vestige of gold backing from the US dollars – dollars could no longer be redeemed by any party for gold. But at least Americans could once again build personal reserves.

Prior to 1933, US gold coins for sale circulated with denominations of $20, $10, $5 and $2.50. The modern American Eagle  1oz gold coin carries a denomination of $50 – a tiny fraction of its actual value based on metal content. Officials do not want gold coins to re-enter circulation or to be spent, in competition with fiat (paper) dollars. Rather the coins are traded by dealers and investors, priced at just above the current melt-value of 1 troy ounce of gold.

The one-ounce American Gold Eagle coins first produced in 1986 after passage of the Gold Bullion Act of 1985 passed. The act authorized the US Mint to produce American Eagle gold coins, but only from gold mined inside the US.

Today, investors can get American Eagle coins in silver, gold, platinum or palladium.

American Gold Eagle 1 ounce gold coins have gold weight and purity that is guaranteed by the federal government.

From 1986 through 1991, the US Mint used Roman Numerals to date the coins. From 1992 on, the coins feature traditional Arabic numerals.

American Eagle gold coins are produced in a 22-karat alloy, called "crown gold," which was originally formulated in 1526 by King Henry VIII. The coins contain 91.67 percent gold with the remaining balance in copper and silver. Each coin is marked by weight, which is the actual amount of gold weight in troy ounces. Coins marked 1-oz contain a full troy ounce of gold content with some additional weight attributable to the silver and copper alloy metals. That means the gross weight of these coins is slightly greater than 1 troy ounce.

You can also check out the American Eagle as a 1 oz pure silver coin if you would prefer the design, but at a lower cost. US Mint Silver Eagles are also offered in smaller sizes, if you are interested in fractional coins. So no matter what you're looking to invest in, we can help you find it.

The packaging of the American Eagle 1 oz gold coin will vary depending on the number of coins purchased.

Quantities of 9 or fewer are shipped well protected in plastic coin flips. Ten or more coins will be placed in original mint tubes which can contain up to 20 coins; whereas, 500 gold coins are shipped in the original red “monster” boxes.

The $50 face value of the 1-ounce coin is marked on the reverse side, but that should not be confused with the coin’s value or price. The actual value of the coin is based upon its gold content and will fluctuate with the market price of gold in the commodities markets.

Though the one-ounce American Gold Eagle have a face value and are legal tender, their purpose is different. 1 ounce gold coins are not intended to be spent with a merchant, at least not unless the merchant is willing to recognize the coin’s actual value. Instead, they are an investment and a hedge against the perpetual devaluation of the US dollar.

American Eagle gold coins are very popular and the US Mint’s guarantee of weight adds some value. For this reason, these coins often carry a slight premium – perhaps 1 - 2% - versus comparable gold coins from elsewhere in the world.

How We Determine the Market Price of the 1 oz. American Gold Eagle Coin

The market value of the one-ounce coin is directly related to its value on the commodity exchanges, such as the COMEX. Like shares in a publicly traded company, gold futures contracts are bought and sold on a continuous basis during the trading day. The price, sometimes referred to as the “spot price”, will fluctuate from moment to moment.

Money Metals Exchange reports and displays the live pricing for gold at the top of our website.

Finding the total price of a 1 ounce American Gold Eagle coin requires taking the “spot price” and adding a “premium” to it. Premiums vary, depending on the item and quantity. They are determined by the production cost of the coin and by the profit margin included by the dealer, but mostly by supply and demand. Like most products in any market, buying in quantity generally means lower cost.

For people who want to buy gold coins regularly, lower premiums are available for those who join our monthly membership plan.

More and more investors are holding US mint gold coins, like the American Eagles inside of retirement accounts, in addition to more traditional stocks and bonds. 1 oz gold Eagles can be held inside “self-directed” Individual Retirement Accounts (IRA's). They are the only exception to the IRS requirement that physical precious metals be at least .999 pure to be eligible for inclusion.

Investors should beware of precious metals dealers who market “proof” or collectible versions of American Eagles for IRAs. IRS rules prevent most numismatic coins in retirement accounts, but a loophole allows rare coin dealers to offer “proof” Eagles. These are typically very overpriced and will not perform nearly as well as regular bullion coins.

Gold American Eagles are the most popular and liquid bullion coin in the world. They are also among the most beautiful. The modest additional premium that investors pay to purchase these coins will almost certainly be returned to them when it is time to sell them. In other words, the beauty, trust and confidence offered by both gold and silver bullion American Eagles make them a cut above, whether you are buying or selling. When you're ready to buy American Gold Eagle coins, Money Metals is here to help!

It came fast and in perfect condition. I will be back to Money Metals for more items.