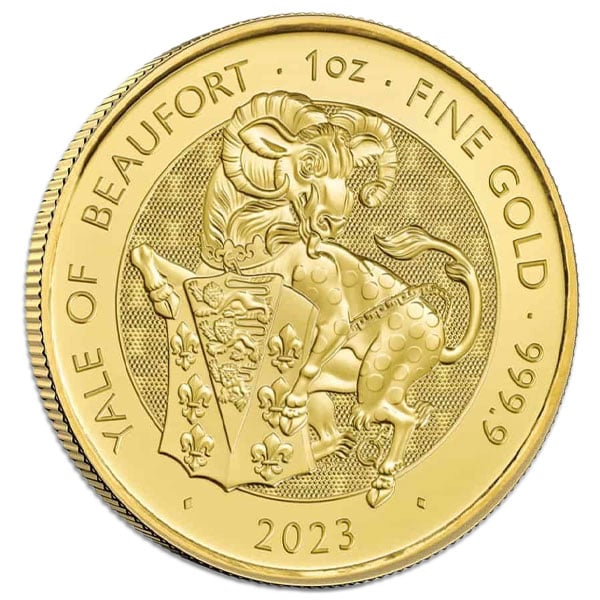 Second in the New Tudor Beasts Series From the British Royal Mint - 2023 Yale of Beaufort in 1 Oz .9999 Gold

The Tudor reign began with Henry VIII who led the House of Lancaster when Wars of the Roses finally ended. King Henry VIII defeated King Richard III of the House of York at the Battle of Bosworth and moved to legitimize his claim to the throne by marrying Elizabeth of York. The House of Tudor was founded in 1485. He and his heirs controlled the throne of England until 1603.

The gold mint coins which commemorate the Tudor reign have been beautifully crafted by the Royal Mint, which was founded hundreds of years before the House of Tudor. The coins ship individually or in mint tubes of 10. A full box contains 10 mint tubes - 100 coins in total. Investors may buy in any quantity, with no minimum purchase.

The coin's obverse carries a portrait of Queen Elizabeth II in high relief along with her name and the 100 pound denomination.

The reverse features the Yale and the heraldic shield of Beaufort. The reverse also identifies the coin as "YALE OF BEAUFORT" and displays the coin’s weight, purity, metal content, and date.