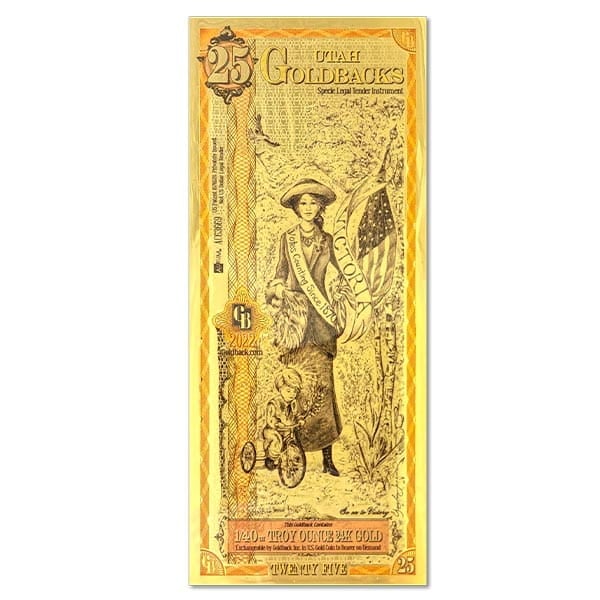 The 25 Goldback Design depicts the Lady Virtue Victoria, or Victory, primarily in celebration of Women’s rights to vote. This is actually the first Goldback design to ever have been done. It was the artist’s audition piece for the series. Victory bears a banner that states “Votes Counting Since 1870”, nodding to the fact that when Utah became a state, women were already voting by that time. The first state to have a woman actually cast a vote in it was Utah (Seraph Young was the voter), though as a state, Wyoming granted women’s suffrage a few months prior to that.

This Goldback design was created by keeping in mind many of the firsts by Utah women, such as women teaching over the pulpit and Martha Hughes Cannon becoming the first woman State Senator in 1911.

Victoria is accompanied by a child in the artwork, representative of how many of the women marched for suffrage with their children, and how teaching children truth has been a major driving force for the women of Utah. The child carries a branch representing how our children are the future, and ultimately are responsible tomorrow for the stewardship of any victories that we win today.

This design urges the viewer to “Go on to Victory”. The backdrop of this design is actually the mountainscape in Alpine, Utah, viewable through the window of the building where these designs were done. The flag that Victory carries in her left hand is topped by the Chi-Rao Greek symbol for Christ, nodding to the help that the women of Utah credited to him at that time for their attaining the many freedoms that they earned. In her right hand she holds bundled wheat, representative of small victories gathered together in a powerful, significant whole. Behind her a falcon is soaring, representing faithful actions, and the hope to return to the things that we love.

We should return and review the actions through history that brought us the victories that we now enjoy. Victory stands along a straight path bordered by a stone wall on one side, representing building good things one small victory at a time; and aspen trees on the other side, representing the interconnectedness of humankind and common heritage, especially through the women who bore each child of the human family.

Really cool product, you can feel the weight.

Really like the products. Cool alternative to the round n bar bullion options. I did notice a slight difference in color tone around the border on some bills. I compared them to another seller. But still happy.

The goldbacks are beautiful works of art. MoneyMetals was secure and reliable with delivery.

I recently received an order of $1, $5, $10, and $25 notes. Absolutely magnificent notes that will greatly enhance my collection. Thank you Money Metals for making these available, and at a very affordable price. You have been my ONLY source for bullion purchases.