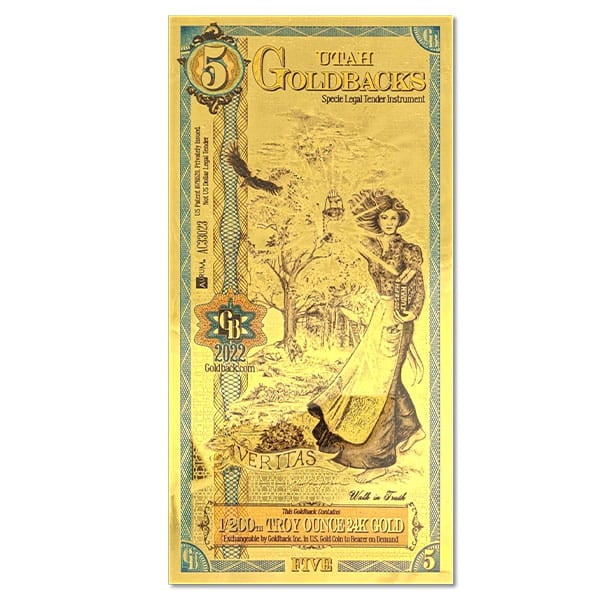 The 5 Goldback bill features a beautiful image of Veritas, the Virtue Truth. She is depicted as a Utah pioneer, nodding to the great migration that brought the first settlers of Utah to Salt Lake Valley in 1847.

With windblown hair, she holds a lantern high with her right hand, casting light out at the viewer to represent the light of truth that she bears, and that truth sheds light on the uncertainty that a person may have as they journey through life. She is accompanied by the footing: “Walk in Truth”.

In the pocket of her apron is a compass, representing making truth our moral compass, and you can see that it is actually pointing West, again, nodding to the western migration of the Utah settlers. In her left hand she holds two books representing written truth. In this version, the books bear the titles “Judah” (for the Bible) and “Joseph” (for the Book of Mormon), referring to the role the two books of scripture had in providing direction as accepted truths for the Utah Pioneers. The faith that they had in God and his word in these books eventually drove them to seek religious freedom in Utah.

Veritas is standing near a pool and a waterfall feeds into it in the background. These represent how we need truth just as much as we need fresh water. A deer, representing a messenger of truth, stands at the base of a massive cottonwood tree and is drinking from the pool of truth. The Roman symbol of the fish as associated with truth is also depicted in the stream that is flowing from the pool.

An eagle flies in the dusky sky above her, watching over truth and nods to how the freedoms promised in the United States allow for truth to flourish. The North Star can be seen shining proudly in the cloudy sky, symbol of how truth is always shining, even if obscured by proverbial clouds.

Finally, Veritas is depicted barefoot in this design, referencing how sometimes following truth leads us to walk hard roads, but the level of difficulty doesn’t change the reality of the truth that we follow, and often makes our arrival at the destination that truth leads us to all the more sweet.

Not only are these made of real gold, but the artwork is gorgeous. A throwback to when real money had well-crafted and attractive artwork on them. I am also getting the wallet to store these in.

It looks like something out of the ordinary. I really liked it!!!

I love these goldbacks. The Utah 5 Goldback is beautiful. The idea of making spendable gold in small amounts is brilliant. And the ability to buy gold a little at a time at a price you can afford is great. Buy some today!

Love this idea. I hope more states adopt a goldback.