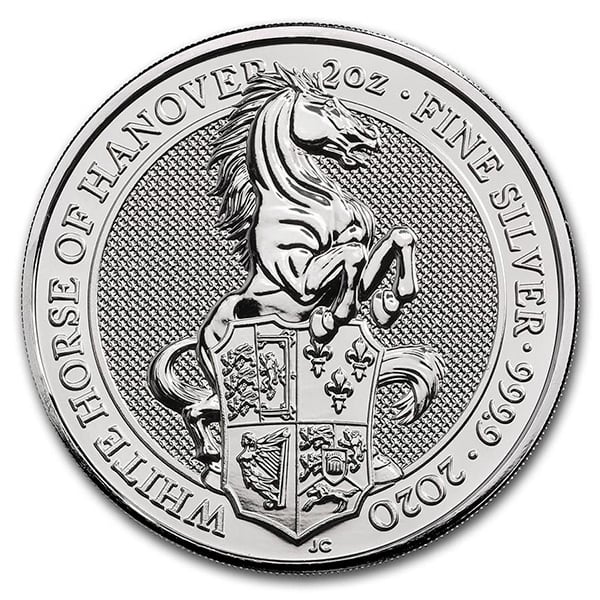 The White Horse of Hanover in Stunning .9999 Silver

Money Metals Exchange proudly offers the White Horse of Hanover - the 9th release in the Queen's Beast series of coins from the Royal Mint. London's Royal Mint just released this stunning silver bullion coin and the mintage will be small. Grab yours today. When the next coin in the series is issued, production of the White Horse will end - forever.

The White Horse of Hanover links Queen Elizabeth to King George I. The coin's reverse shows the Horse rearing behind a shield emblazoned with heraldic symbols of King George; the leopards of England, the lion of Scotland, the fleur-de-lis of France, the harp of Ireland and the Arms of Hanover. The White Horse was introduced to the Royal Arms in 1714 when George I, Duke of Hanover, ascended to the throne of all Great Britain, France and Ireland.

These silver coins for sale are twice the size of other popular bullion coins for sale, such as the silver American Eagle bullion coin or Canadian Silver Maple. If that isn't enough to make them stand out, the beautiful image of the Lion clutching the shield of Beaufort on the coin's reverse certainly will. Each is minted with .9999 pure silver, and denominated with £5 (British pounds). The coins ship from the mint in boxes of 200 coins -- 20 tubes filled with 10 coins each, though investors may buy in any quantity, with no minimum purchase.

Today I received both the Horse and Lion coins. Both are absolutely stunning. Highly recommend these to anyone. Thank you MME for the great job getting these to me on time even during COVID-19.

Second one of the white horse I bought, thanks what a beauty

I have 4 of the Queens Beasts series of coins. All of them are beautiful and of the highest quality. I feel that when you compare price and quality these coins have to be among the most desirable of all coins. I will continue to buy them until I have the entire set

My first coin of the series was the 2oz. Unicorn and then I was hooked. I started collecting all the Queen Beasts. The White Horse is a great addition this year. I was so amazed by the (9) Queen Beasts in the series I had to go back and double dip!! I am now the proud owner of 2 sets of the Queens Beasts series with one more to go. I hope MMX is able to get the Greyhound if and when it's available, because I'll need two of them. (smile) Thanks again for having such a great inventory of silver products even though many are out of stock. --Mr. T.--