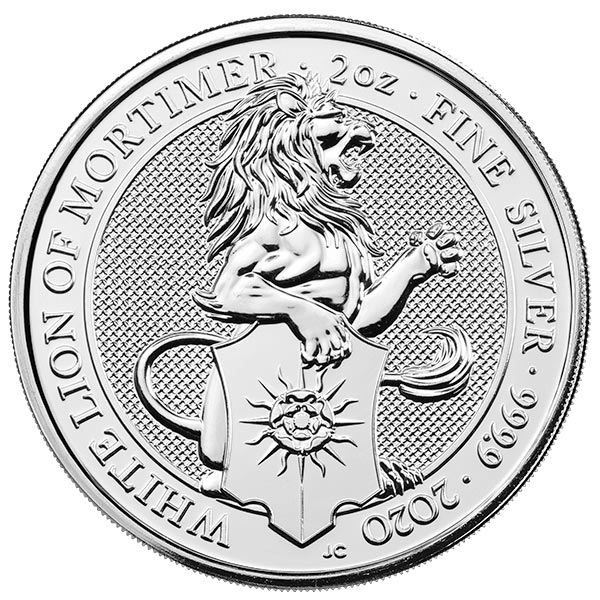 The Yale of the Beaufort in Stunning .9999 Silver

Money Metals Exchange proudly offers the White Lion of Mortimer - the 8th release in the Queen's Beast series of coins from the Royal Mint. London's Royal Mint just released this stunning silver bullion coin and the mintage will be small. Grab yours today. When the next coin in the series is issued, production of the White Lion will end and the design will be retired.

The coin's obverse carries the iconic portrait of Queen Elizabeth II (Queen's beasts silver yale). The weight and purity of this sovereign coin is guaranteed by the British government.

These silver coins for sale are twice the size of other popular bullion coins for sale, such as the silver American Eagle bullion coin or Canadian Silver Maple. If that isn't enough to make them stand out, the beautiful image of the Lion clutching the shield of Beaufort on the coin's reverse certainly will. Each is minted with .9999 pure silver, and denominated with £5 (British pounds). The coins ship from the mint in boxes of 200 coins -- 20 tubes filled with 10 coins each, though investors may buy in any quantity, with no minimum purchase.

The Sun Never Sets on the British Empire

Even though the title of my review is the old, canned statement of Britain through the centuries, that they are minting such beautiful coins is reason enough to have this as the title. I am sure that these 2 oz coins are spread around the world, keeping the saying truthful. The prices are good, the minting is superb and everyone should have one in their stacks. The British Empire now is present here in Savannah Georgia.

These are absolutely gorgeous silver coins and are very thick - a very dense coin with exquisite minting and a bright proof like finish. I can see why these are so popular with collectors, as the Royal Mint has done a spectacular job in designing and minting these coins.