The Top 10 Best Gold Coins to Buy for Investment

When looking for investment options, gold coins should rate the top of your list. It is, arguably, the best option for collectors and investors alike. Gold provides physical, easily liquidated assets and is indispensable in engineering and electronics, as well as the health, environmental, and jewelry industries. In coins, rounds, and bars, gold promises to be in constant demand.

According to the World Gold Council, "The modern gold market is a picture of diversity and growth." The council claims that gold production has tripled since the early 70s. Meanwhile, the amount of gold purchased annually has quadrupled.

Gold resists corrosion, can be stored in a relatively small space, and holds its value well. Additionally, investors need not pay capital gains tax on gold purchases – only upon sale.

We recommend purchasing one-ounce coins for the lowest premium above Spot price, but many coins below come in smaller versions as well.

Invest in these Gold Coins: 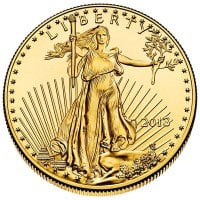 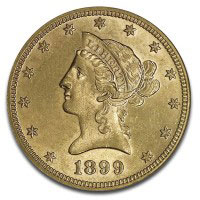 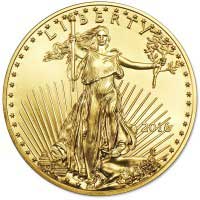 Available in one-tenth-ounce, quarter-ounce, half-ounce, and one-ounce coins, the American Gold Eagle should be at the top of your "must-have" list. It was designed and first minted in 1986 and has stood the test of time. The American government releases a limited number of these coins per year. You can purchase them as proofs, uncirculated coins, or proof sets. 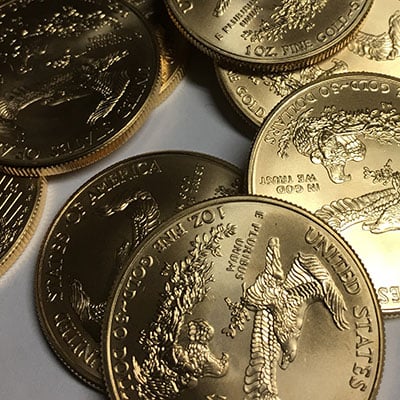 The American Eagle contains 91.67 percent gold (22 karats), 5.33 percent copper, and 3 percent silver. The U.S. Government guarantees the weight, content, and purity of these coins, making the American Eagle one of the most popular investment coins you can buy. They are easily valued and highly liquid.

While the spot price of gold determines the value of any investment coin, they also carry a legal tender value ranging from $50 for the one troy-ounce coin to $5 for the one-tenth-ounce piece. The American Eagle is also available in silver.

The coin's face features a strong Lady Liberty, her hair tumbling in a brisk wind. She holds her torch high in her right hand and has an olive branch in her left. She stands before the Capitol building on a field of rays. Stars march around the outer edge of the coin. The face of the coin shows the year it was minted.

The reverse side holds a touching vignette of a family of eagles. The male furls his wings, preparing to land in his nest where his mate and their hatchling await. He holds an olive branch in his claws.

American Eagle coins are scheduled to be redesigned in 2021 to introduce more up-to-date counterfeiting measures, making this coin an even better investment.

The one-ounce Canadian Maple Leaf gold coin is one of the most secure investments in the world. This security allows the stunning Canadian Gold Maple Leaf coin to give even the Gold American Eagles a run for their money.

The award-winning Royal Canadian Mint is always on the cutting edge of technology. Bullion DNA (Digital Non-destructive Activation) technology, introduced in 2013, is one of their most significant advances.

This technology consists of micro-engraved images on the face and reverse of their 1-ounce gold bullion Maple Leaf Coin. The Mint takes high-resolution photos of every one of these beautiful coins, storing them on secure servers. A special reader, released only to authorized dealers and distributors, allows real-time authentication of one-ounce Maple Leaf coins struck after 2013.

Made of .9999 fine gold, the Canadian Maple Leaf is available in fractional sizes up to five ounces.

On its face, the coin displays a right-facing bust of Queen Elizabeth in pearls. The reverse features a single maple leaf, Canada's national symbol.

These coins are guaranteed by the Canadian government, making the Canadian Maple Leaf gold coin a solid investment for beginners and experts alike.

The American Gold Buffalo is the first 24-karat coin minted in the United States. It was released by the U.S. government in 2006 who required the coins to be minted from gold mined in America. It gets its classic looks from the original James Earle Fraser design for the Buffalo Nickel. This design was commissioned in the 1900s by President Franklin Roosevelt. 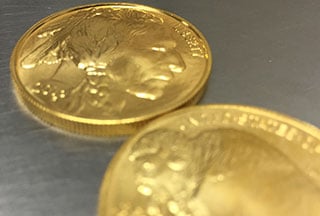 Its face holds the austere, aquiline features of a Native American Chieftain with two feathers tied high in his hair. On the reverse is the proud profile of an American Buffalo gazing westward.

The U.S mint released the Buffalo coin to compete with the Canadian Maple Leaf, the Austrian Philharmonic, and other 24-karat coins available to collectors and investors alike. The coin's purity (.9999 fine gold) makes it softer than the American Eagle. Handle with care to avoid marks and scuffs in the metal.

The Gold Buffalo carries a face value of $50. However, this uniquely American coin — printed on gold mined in the United States, stamped by an American Mint, and backed by the United States government — is a stable value for discerning investors. 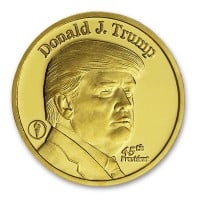 Since its introduction in 1967, the Krugerrand has carried a storied history. The distinctly colored coin is 91.67 percent gold and 8.33 percent copper. Its name is a combination of South Africa's first president, Paul Kruger, and the Rand Refinery, which mints the coin. 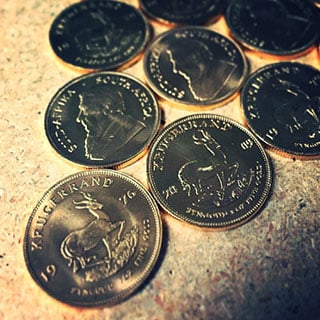 Kruger's presidency lasted from 1883 through 1900. While he was in office, South Africa saw the founding of the Durban Deep Mine, and the Witwatersrand Gold Rush. These events eventually led to the founding of Johannesburg, one of South Africa's largest cities.

During the 1970s and 1980s, the Krugerrand was illegal to import into the United States due to the South African nation's apartheid laws. Before this time, the United States was one of the Krugerrand's largest markets, because U.S. citizens were unable to own gold bullion but could own foreign coins and bullion. At its height, the Kruggerand made up 90 percent of the global gold coin exchange.

Even today, the Gold Krugerrand is one of the most frequently traded gold coins in the world.

The face of this copper-tinted coin is that of President Paul Kruger in profile. He faces left, his long beard cascading down to his chest. The reverse side of the coin features a graceful springbok mid-leap. The springbok is South Africa's national animal, as well as the name of the country's rugby team.

Available in one-tenth-, quarter-, half-, and one-ounce coins, plus four-coin sets, the Krugerrand is a staple for many investors. It is also available in silver.

The Vienna or Austrian Philharmonic, first released in 1989, filled the hole that the sanctions imposed on South Africa, and therefore the Kruggerand, left in the gold market. A favorite of investors and music-lovers alike, the Philharmonic was the first European one-ounce gold investment coin on the exchange. Minted by the Münze Österreich AG, the Austrian Mint, it was the best-selling gold coin in Europe by 1990.

All the Philharmonic coins display the same design, with only the mintage year changing. These coins boast 99.99 gold and come in one-tenth-, quarter-, half-, and one-ounce weights with the addition of a 1/25-ounce coin. There are also two larger weights—the 20-ounce gold coin and a 1,000-ounce coin called "Big Phil." 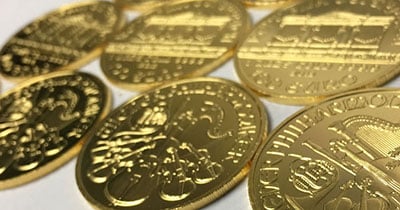 The front of the coin depicts the world-famous pipe organ of the Vienna Musikverein's Golden Hall, where some of the best musicians in the world perform. The Musikverein is the main stage for the Vienna Mozart Orchestra and is the permanent seat of the world-renowned Vienna Philharmonic.

The reverse side of the coin shows a plethora of instruments, featuring the bassoon, Vienna horn, harp, and four violins, all surrounding a cello.

In most European countries, the Gold Philharmonic is not subject to VAT, while the silver is subject to reduced taxes. It is one of the only coins to show a face-value in euros. It is also available in platinum.

The British gold Sovereign contains .2354 troy ounces of gold and represents a solid investment choice for investors wanting to diversify their bullion.

St. George rides a rearing horse and clutches a short sword with a dying dragon at his feet on the obverse. The reverse is the profile of a Monarch of England, including King William IV, Queen Victoria, King George IV, and Queen Elizabeth II.

The Chinese Gold Panda was China's first gold coin and the third on the market after the American Eagle and the Canadian Maple Leaf.

Its obverse design changes yearly, spotlighting the Giant Panda (China's national animal) in various poses. The Temple of Heaven sits on the reverse. The coin is .999 pure gold.

Initially available in the standard ounce weights, the Pandas moved to metric units in 2016. They are available in one-gram, three-gram, eight-gram, fifteen-gram, and thirty-gram coins as well as in sets.

First released in 1987, this coin was initially known as the Gold Nugget, as that was the design on its reverse face. However, the Perth Mint changed the nugget to a kangaroo in 1989, resulting in a name change for the coin. 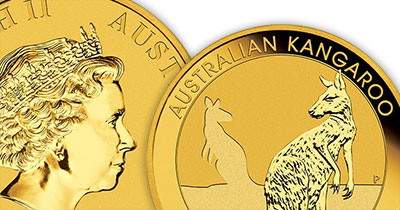 Queen Elizabeth II wears her crown on the obverse face of the coin, staring regally to the right.

The Kangaroo is available in one kilo (just over two pounds), one troy ounce, half troy ounce, quarter troy ounce, and one-tenth troy ounce sizes. You can also purchase it in a high relief version as well as in proof sets.

The half-ounce American Eagle gold coin is such an excellent bullion investment that we have to mention it individually. 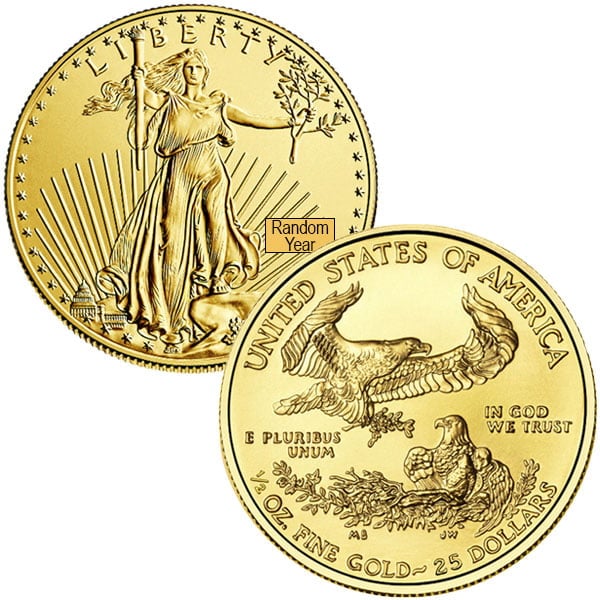 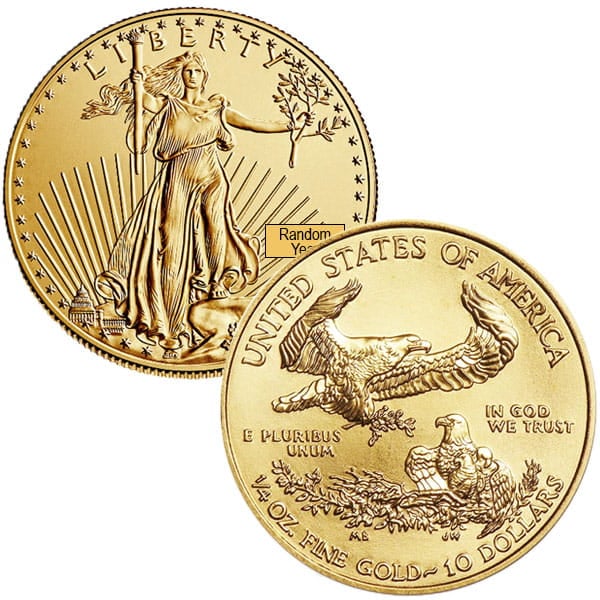 What Size Gold Coins Should I Be Buying?

What do you think are the best denominations of gold coins to hold and why? I understand the 1/2, 1/4, 1/10 oz. coins are more expensive, but then, could there be a need for the smaller denominations? And if at some point you decide to sell them, won't you get the same amount of gain as from the 1 oz. coin?

Fractional-ounce coins aren't usually the most cost-effective way to own gold. For example, 10 tenth-ounce coins would cost more than a one-ounce coin. (That said, you may be able to sell back the 10 tenth-ounce coins to a dealer for more than the single-ounce coin.) In percentage terms, premiums on the fractional are unlikely to increase more rapidly than the gold price itself – a dynamic that militates in favor of holding one ouncers or even lower-premium items such as bars.

But there are good reasons to own smaller denominations. They are certainly attractive if you aren't able or don't want to buy a full ounce of gold at a time. They can also be useful potentially for gifting, barter and trade, or for holding in travel or bug-out kits.