Top Reasons to Do Business with Money Metals Exchange:

Purchasing (or Selling) Gold and Silver in North Carolina 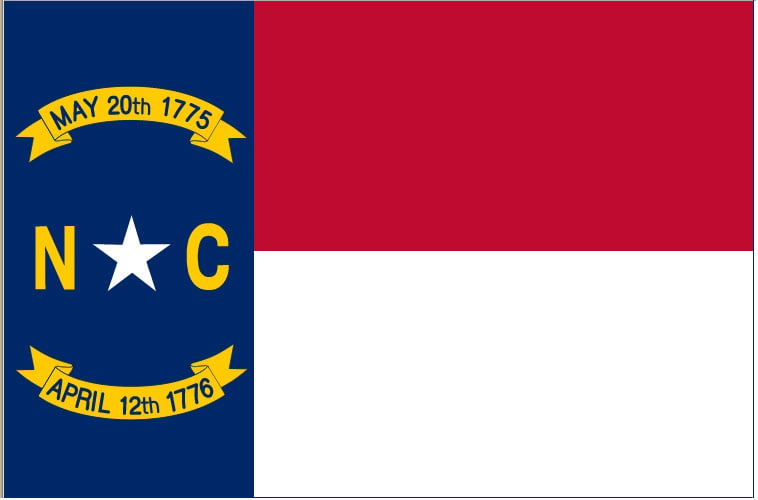 What are the Laws on Gold & Silver in North Carolina?

North Carolina has started the process of freeing gold and silver from bureaucratic shackles.

Investment coins is defined as "numismatic coins or other forms of money and legal tender manufactured of the metal under the laws of the United States or any foreign nation with a fair market value greater than any statutory of nominal value of such coins."

Investment metal bullion is defined as "any elementary precious metal that has been put through a process of smelting or refining and that is in such state or condition that its value depends upon its content and not upon its form." The statute says that "investment metal bullion does not include fabricated precious metal that has been processed or manufactured for one or more specific and customary industrial, professional, or artistic uses."

Non-coin currency is defined as "forms of money and legal tender manufactured of a material other than metal under the laws of the United States or any foreign nation with a fair market value greater than any statutory or nominal value of such currency."

For more information on rolling back sales tax on constitutional money, click here.

North Carolina law, like most states, is chock full of draconian revenue statutes. Under current law, gold and silver are subject to capital gains taxation when exchanged for Federal Reserve notes or when used in barter transactions.

Income taxes are one major way government bureaucrats penalize holders of precious metals. If you own gold to protect against the ongoing devaluation of America's paper currency (which results from the inflationary practices of the Federal Reserve), you may end up with a "gain" on your gold when it's priced in dollars. Not necessarily a real gain, mind you. It's frequently nothing more than a nominal gain -- but it's nonetheless considered income against which the government assesses a tax.

However, other state legislators across the country have started to recognize that paying taxes on nominal gains is beyond the pale. Arizona and Utah recently eliminated capital gains taxation on precious metals, and Idaho hopes to follow soon.

Gold and Silver Recognized as Money in North Carolina?

The United States Constitution states in Article I, Section 10, "No state shall...make anything Thing but gold and silver Coin a Tender in Payment of Debts."

Legislative acts that take steps towards this constitutional requirement are slowly gaining steam. Utah and Oklahoma are leaders in this field, declaring gold and silver as money within their states.

Unfortunately, North Carolina has not taken any steps to reaffirm its constitutional duty to treat gold and silver coins as tender for payment of debts as Oklahoma and Utah did with the recent passage of SB 862 and HB 157, respectively.

Utah’s HB 157 reads, in part, “except as expressly provided by contract, a person may not compel any other person to tender or accept legal tender.”

The phrase, “except as agreed upon by contract,” has significant ramifications. This wording reaffirms the court’s ability, and constitutional responsibility according to Article I, Section 10, to require specific performance when enforcing such contracts. If voluntary parties agree to be paid, or to pay, in gold and silver coin, the Oklahoma courts may not substitute any other thing, e.g. Federal Reserve Notes, as payment.

Practically speaking, state laws that recognize gold and silver as money restore a government view of precious metals as the favored form of money – a currency rather than a piece of property or other asset. Using this logic, it would be inappropriate for a state to levy taxes when the precious metals are used or exchanged.

North Carolina law does not currently allow for a state bullion depository.

While North Carolina may not currently have a bullion depository within the state, there's reason to be hopeful. Texas is championing the state depository cause and other states will likely follow suit. In June of 2015, Texas Governor Greg Abbott signed House Bill 483 into law.

Authored by Representative Giovanni Capriglione (R-Southlake), this bill allows for "the establishment and administration of a state bullion depository."

According to the official Texas Depository website, House Bill 483 "allows for the nation's first state bullion depository to be established in Texas under the supervision of the state's comptroller's office."

Upon signing the bill, Governor Greg Abbott said "with the passage of this bill, the Texas Bullion Depository will become the first state-level facility of its kind in the nation, increasing the security and stability of our gold reserves and keeping taxpayer funds from leaving Texas to pay for fees to store gold in facilities outside our state."

Financially prudent individuals set aside surplus funds to protect against unforeseen expenditures. This way, when faced with loss of income, house repairs, car trouble, or anything else, they will have a buffer against unanticipated downturns.

In the same vein, almost every state in the United States has established a “savings account” for government operations. Primarily to mitigate a decline in tax revenues that comes alongside economic slumps, states have created so-called budget stabilization funds – colloquially known as “rainy day funds.”

Unfortunately, like every other state in the union, North Carolina does not hold any of its reserves in gold and silver.

While North Carolina may not hold its reserves in gold and silver yet, Tennessee is setting an example by considering legislation that would allow for this. Tennessee Representative Bud Hulsey introduced House Bill 0777 in 2017 which "requires the state treasurer to invest 40 percent of the funds in the rainy day fund in gold bullion of other precious metal bullion." This bill will be voted on in 2018.

Millions of Americans will rely on pensions once they've reached the age of retirement. Pension fund managers have a fiduciary duty to safeguard funds against foreseeable risks.

With the practices of today's Federal Reserve, there is no risk more foreseeable than inflation! But with very few exceptions, pension money managers are not fulfilling their duty to protect against this significant risk by investing in assets that are specifically suited to defend against the perpetual decline of the dollar's purchasing power. Chief among these assets are physical gold and silver, the most reliable inflation hedges from time immemorial.

Tens of millions of Americans and their employers pour money into pension plans each month, counting on those funds to grow and be there when needed at retirement.

But a time bomb awaits. The bulk of U.S. pension funds are dangerously underfunded, and the assets are often invested in securities that have bleak prospects for providing income that keeps up with a general decline in purchasing power. In the case of underfunded government pensions, higher taxes invariably follow combined with potential default on obligations to retired workers.

Unfortunately, North Carolina's government pension funds do not appear to hold ANY assets in physical gold and silver.

Texas gives states an example to emulate. The Texas Teacher Retirement Fund and the University of Texas own nearly $1 billion in physical gold (gold bullion for sale). As a non-correlated asset to bonds, stocks, and other paper-based investments, precious metals are key to true diversification.

Find gold coins and bars for sale throughout North Carolina:

The following are dealers in North Carolina. DISCLAIMER: Money Metals Exchange does not vet or endorse any other dealers, so if you decide to patronize any of the following establishments, be sure to do your own due dilligence.