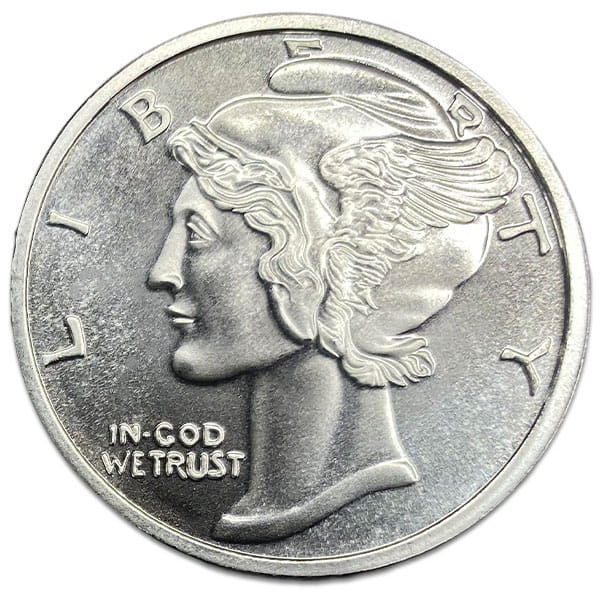 The US Mint issued the "Mercury" dime from 1916 to 1945. Adolph Weinman designed the coin with Lady Liberty wearing a winger Phrygian cap. He did not know the image would be confused with the Roman gold Mercury, who has always been depicted wearing a winged cap. Despite this confusion, the design became one of the most popular ever produced by the Mint.

Today this design is the inspiration behind a series of pure silver 1 ounce rounds. Investors can get investment grade silver with this iconic design.

Better yet, 1 Oz Mercury silver rounds are affordable and abundantly available at low premiums. Investors can get an well known and popular design, without paying a hefty price.

Coins and rounds can look similar enough that people sometimes mistake one for the other. However, there are some major differences. The most obvious difference between the official Mercury coin and the rounds is the size and the engraved text. The rounds are much larger in size, because they are 1 troy oz in weight. Silver dimes weigh less than a tenth of an ounce. Rounds are marked with weight and purity, while the Mercury dimes are not.

Coins are exclusively made by a government mint. In the United States, only the US Mint is permitted to strike coins. Coins can have a face value, meaning they are legal tender. They often feature the mark of the production US Mint. And they almost always carry the date of issue.

Rounds are struck at a private mints. The may have the similar obverse and reverse design as a coin, but they will not have a face value. Rounds are not legal tender backed by the United States government.

In general, coins tend to have a higher premium than rounds. They are also far more popular with collectors while rounds appeal more to investors looking to get as much precious metal for their flat currency as possible.

The Barber dime, predecessor to the Mercury dime, was not a popular design, though it was issued for 25 years. In 1916, the Commission of Fine Arts rejected updated designs offered by Barber and solicited proposals from Adolph Weinman and two other sculptors. Weinman's design was ultimately chosen.

Today’s current production Mercury silver rounds are an homage to the classic design of the classic one dollar silver coin. Though struck in numerous private mints, the exact design tends to be somewhate standardized with only minor variations among coins of different manufacturers.

The most common size is the one troy ounce silver round with 99.9% purity.

The obverse of the Mercury round features Lady Liberty in her winged cap. The word "LIBERTY" is inscribed around the edge, and "IN GOD WE TRUST" is engraved at the lower left.

The reverse of the Mercury round carries the olive branch and fasces - A bundle of rods bound around axe, with the blade projecting. The fasces was carried in front of Roman magistrates as an empblem of authority. The inscriptions "ONE TROY OUNCE .999 SILVER" and "E PLURIBUS UNUM"

The one troy ounce rounds weigh 31.1035 grams. The rounds measure 39 millimeters in diameter and 2.8 millimeters in thickness. The edges of the round are usually reeded, as opposed to the plain original. All manufacturers make the Mercury silver rounds with 99.9% purity and reeded edges.

Various private mints across the United States make Mercury silver rounds. The one ounce round as it is the most requested and sought-after variety.

Silver rounds are designed to be sold at a price which is not much higher than the market price of silver. They are not collectibles, like some silver coins. Rather, they are made in mass quantities and bought and sold as a commodity. They attract investors who wish to park their money in precious metals and then be able to liquidate quickly and easily at the market price.

Accordingly, Mercury silver rounds have rather uniform prices across the board regardless of the mint that produces them.

Should I Invest in 1 Oz Mercury Silver Rounds?

Mercury silver rounds are affordable and in plentiful supply. They also have low premiums so are perfect for precious metal investors.

Money Metals has a winner here! Their silver rounds are the most convenient method of investing in silver for me and I can acquire a little bit at a time as my finances allow. I think the Mercury coin is their most handsome. You can't go wrong here.

With the shortages and limited supplies on all silver, this new release was one I couldn't pass up. It is beautifully done and includes incredible detail and luster compared to the constitutional collectible. Great for a gift. I will no doubt be getting more while they last.

I always liked the “Mercury” dimes. Now I can actually see this design in big and beautiful pure silver.

This Mercury Silver round is very unique & the detail is great! We always receive the orders in the time frames committed & accurate. We received one order out of many that was incorrect (short 3 rounds), called customer service, it was corrected within hours. Very impressed with the customer service, which is lacking in most companies.

Memories of the Mercury Dime