Reality is setting in. The latest jobs data reveal a bleak economic picture. Word on the Street is that the Fed is readying its digital printing presses to try to prevent the economy from teetering into recession.

In response, the gold market perked up in a big way on Friday (June 1, 2012), and my fundamental and technical indicators suggest that precious metals are now poised to rally strongly. 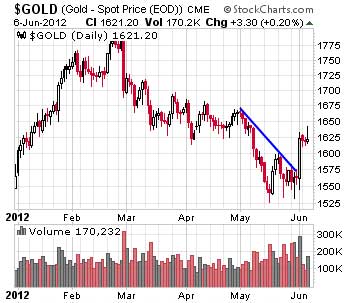 This is Seth Van Brocklin, Contributing Editor to Independent Living News. I've been asked to write this Special Edition of the Money Metals News Service in light of Friday's pivotal market action.

Gold prices in 2012 blasted 4.2% ($66) higher on Friday to kick off the new month, closing at $1,626. Last week's Update suggested that a decisive break above $1,600 would confirm a new uptrend taking hold. We got the breakout, and it occurred on heavy volume. The gold chart now looks quite bullish in 2012.

As for silver, it rose 3.0% on Friday, finishing at $28.55. But the rebounding metal ran into a line of resistance it couldn't overtake. Silver still needs to clear the $29 level to confirm that a bottom of some significance is in place. 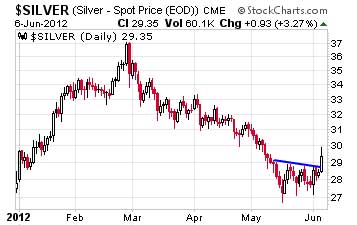 Despite silver's failure to confirm gold's breakout, silver's chart looks encouraging. It shows a base forming, with a big directional move likely to follow once prices clear the zone of consolidation.

Ideally, we would have seen silver outperform and confirm gold's breakout on Friday. But given the fact that industrial metals slipped (copper fell 1.5% on the day) and the stock market tanked (the Dow Jones plunged 2.2%), silver performed impressively. The "poor man's gold" proved that it isn't merely a base metal. It also serves at times as a safe-haven metal.

Gold's Single-Day Surge Was 6.7% by This Measure

But because silver has more industrial characteristics than gold, silver typically underperforms gold on days when economic concerns drive stocks down. Gold doesn't always do well on bad days for stocks, either. But the diversification benefits gold provides investors can suddenly hit home on days like Friday, when the Midas metal's 4.2% nominal gain translated into a massive 6.7% gain versus the Dow!

Platinum and palladium also closed higher for the week at $1,443 and $612, respectively.

The reason why gold rose and stocks fell so dramatically can be summed up in a single word: jobs. As in, the lack of them!

Last week's stunner of a jobs report revealed that the economy added a disappointing 69,000 jobs in May, half of what was needed just to keep employment rates steady. The unemployment rate ticked up to 8.2% officially.

Underneath the facade of the official unemployment number is a much grimmer reality. More than 100 million working-age Americans don't have jobs. A lot of them are students. But millions of "marginal" and "discouraged" workers who don't go to school and can't find jobs have been statistically expunged from the ranks of the officially unemployed and moved to the category of "not in labor force" – as if they were non-persons.?

The economy's deceleration increases the odds that a fresh round of Quantitative Easing (or currency creation by some other name) will be announced this month by the Federal Reserve. That's what the gold market is anticipating.

Last week was a moderate week of customer buying activity at Money Metals Exchange. Silver purchases far outweighed gold sales (despite the gold cost) as usual and customer selling was once again negligible so far in 2012.

As for premiums, a jump in safe-haven buying late last week tightened supplies of some gold and silver products offered by Money Metals, especially pre-1965 90% silver coins. Premiums on 90% silver rose by 20 cents. With the silver and gold price still at suppressed levels in 2012, and with the likelihood that we will be seeing a move higher in the spot silver price in weeks and months ahead, the sellers for this no-longer-minted form of silver have been scarce. As a result the supply has begun to dry up.