While our precious metals specialists have the pleasure of addressing on an individual basis many excellent questions posed by our customers, we occasionally take the opportunity to answer some of the best and most common questions in a more public way...

Will Silver Make a Come-Back as Legal Tender?

Evangeline W. writes: I have recently started with your monthly gold/silver accumulation program. I do have some concerns, as I am not sure how this will help in the event of the dollar losing all its value. I also have a small amount of silver that I came by over the years. Will silver ever be used again as legal tender? Or will I have to sell it? How difficult will that be when things fall apart, like delivery of mail? What will I sell it for if the dollar is gone?

Actual silver coinage may never be officially reintroduced into circulation. Governments around the world are moving to drive out even paper money to create a digital economy. There's a reason why there are no $1,000 bills or $10,000 bills anymore. The government wants to make it impracticable to pay for large purchases in cash. Bills and coins represent only 7% of all economic transactions in the U.S. and as little as 3% in Sweden, where public buses don't accept cash. Governments want all transactions to be electronic (credit cards, debit cards, smartphones, etc.) so that all purchases can be automatically logged and traced back to individual purchasers. 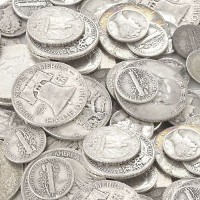 Short of a sudden currency collapse, it's more likely that silver-backed and gold-backed currencies (both private and governmental) will get integrated into the electronic economy through debit cards, etc., as is being explored in Utah.

As for your other questions, keep in mind that silver's real value exists independent of the dollar's value. Whether an ounce of silver is worth one unit of a currency or a million units of a currency tells us nothing about how many gallons of gasoline or loaves of bread that ounce of silver can buy.

There never has been and never will be a time in the history of civilization when silver ceases to be a store of value. Whether you use to it directly as money in a barter transaction or sell it for whatever the exchange rate happens to be in whatever currency you pay your bills in, silver will be widely recognized and accepted. You can sell it to local jewelers, pawn shops, or coin shops, or to major coin dealers such as Money Metals Exchange (which already send and receive bullion through private carriers other than the tenuous U.S. Postal Service).

The Latest on Manipulation in Silver Markets

William U. writes: Recently your newsletter and others have been talking about Chase and other banks manipulating the gold and silver market by "short selling." What happens when these contracts come due? Don't they have to come up with the physical metal?

In effect, the commercial short sellers who hold an inordinately large position in the futures market don't have to deliver the metal they've sold. The contracts are almost always settled in cash. If all "longs" demanded delivery of the metal, which they are entitled to do, then the COMEX futures exchange would have a problem on its hands, because there is nowhere near enough silver in reserve to meet that kind of demand.

However, in a delivery default situation, the COMEX can allow a settlement in cash, even though the credibility of the COMEX would certainly be damaged. The danger that an investor may not be able to secure delivery of his metal is one of many reasons why the futures market is a lousy place to be.

Hey, Where Is All that Inflation?

Larry writes: What is your take on the theory of why inflation is so low?

It's not as low as reported. But in terms of overall consumer price levels, inflation has been relatively tame in spite of the trillions of dollars of injections of stimulus and liquidity since the 2008 financial crisis.

The reason, in part, is because the interventions have failed! They've failed to lift housing prices, failed to lift employment numbers back up to healthy levels, and failed to boost the real economy (managing only to prevent it from collapsing by keeping the financial sector propped up). If the economy was strong, then we'd see strong demand for energy push oil prices to record highs of probably $200 per barrel. 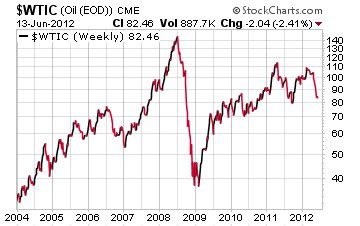 The fact that we've seen oil prices trade around $100 for most of the year in a relatively weak economy tells us that there is an insidious inflation threat. With oil now below the psychologically important $100 level, Federal Reserve officials will have no qualms about unleashing another "QE" if they think the economy (or the bankers or the politicians up for re-election) would enjoy a short-term boost.

Eventually, the Fed will go one QE too far, trigger a massive psychological shift toward inflation fears, and trigger an increase in the velocity of the currency supply as the public shifts from wanting to save dollars to wanting to save purchasing power. The amount of currency units in existence is already highly inflationary per se, but the inflation isn't yet manifesting that dramatically in prices because consumers and banks have been hunkering down.

As Axel Merk of the Merk Hard Currency Fund explained in a May commentary:

"A key reason why all the money that has been printed hasn't made it to the real economy is because major deflationary forces are present, as a result of the financial crisis? In this environment, it's likely that the Fed can get away with just about anything in terms of monetary expansion. But should these policies work, should all the money that has been printed make it through to the real economy, the Fed may find itself in a tricky situation."

If forced to choose between: a) fomenting uncomfortably high price inflation; or b) allowing the banking system to collapse, allowing the U.S. Treasury to default, and/or forcing Congress to spend only what it takes in, we'd bet on the inflationary route.