Summertime Bargain Hunting: Is Gold or Silver the Better Value?

With the dog days of summer offering attractive buying opportunities in the oversold precious metals markets, is now the time for bullion investors to opt for gold or for silver? Well, the one-word answer is: both. But there are reasons why you personally might want to favor one over the other at this time.

The two metals each have their own unique fundamentals, properties, and practicalities we'll consider here. First, though, let's look at their recent and historical price performances relative to each other.

Gold Is Now Worth Roughly 60 Times More than Silver – But What about Historically?

Gold and silver tend to trade fairly close together on any given day, with silver being the more price-volatile of the two. But, over time, they can diverge. The gold:silver ratio has trended mostly higher since May 2011, when silver put in an intermediate-term top. In June 2012, the ratio hit 60:1, which is about what its average has been over the past three decades. 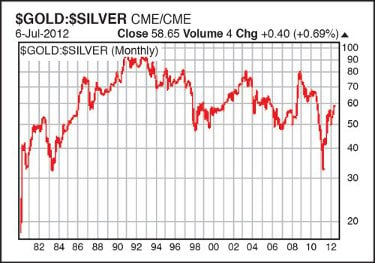 With gold selling at nearly 60 times the price of silver, there is room for the ratio to move down toward the "natural ratio" of approximately 10:1. That's the proportion of silver in the Earth's crust relative to gold. It may not ever get that low due to the fact that gold is hoarded more than silver. But in centuries past, going as far back as the 12th century, gold sold for 15-16 times the price of silver by convention in many societies. This is the "classic ratio."

The gold:silver ratio likely will revisit 16:1 at some point, probably before the current (decade-long so far) bull market runs its course. Some credible silver analysts believe that the ratio will actually go much lower than 16:1. But there are no guarantees. History often rhymes but doesn't always repeat.

Ideas on How to Allocate Your Metals Holdings

In general, I advise a 50/50 split between gold and silver (and optionally, a small allocation to platinum and/or palladium). But aggressive investors will probably want to "overweight" silver at this point in anticipation that it will outperform gold as the precious metals market approaches what could potentially be a mania phase.

To be fair and balanced, there are those who believe gold will outperform silver. Their main argument is that gold, as a monetary metal, will shine brightest in a monetary crisis; and that silver, as more of an industrial metal, would suffer more during an economic contraction. 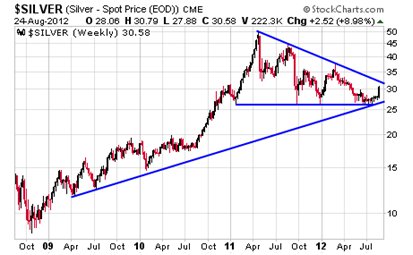 A secondary argument for the yellow metal is that gold is culturally mandatory for jewelry in burgeoning regions of the world such as the Indian subcontinent, where citizens hold more total gold wealth than anywhere else in the world. There are no substitutes for gold in satisfying jewelry demand, but substitutes for silver could potentially be used in industry.

As far as this latter argument goes, I actually think that in the long run, silver's broad industrial uses are bullish. For every application in which copper (or some other metal) can be substituted for silver, a new application (often in high-technology) requiring silver is developed. Most of this industrial silver is consumed, not recycled; whereas with gold, it's almost never consumed out of existence – as gold is dug out of the ground, the total above-ground supply continues to build.

The monetary argument for favoring gold is a better one. In an economic or currency crisis, gold could well outperform as the ultimate safe-haven that it is. But a "panic" mentality is likely to be temporary. The more serious long-term threat is that the currency doesn't collapse suddenly – but instead depreciates steadily in the midst of a weak (but not collapsing) economy. This type of environment is known otherwise as stagflation, and I'd expect silver to dramatically outperform under such conditions, as it did during the late 1970s. 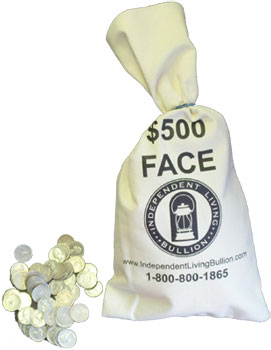 Pre 1965 silver quarters, dimes,
and half dollars are a
cheap way to accumulate silver.

When most people think of precious metals investing, they first think of gold. But if you're just getting started – or assisting someone who is – silver should be your first priority. Establishing a silver stash consisting of one-ounce rounds and coins and pre-1965 halves, quarters, and dimes is a must for practical reasons. Silver is much handier to use as a transactional currency for commerce or barter than gold due to gold's highly concentrated value. Unlike gold coins, silver coins can be traded, sold, or given away in relatively small dollar-value increments. Silver bars are also a great bet for investors looking to get the most silver for their money.

Gold has practical advantages over silver in terms of being able to store more value while taking up less space, and being easier to transport. It's also less volatile price wise.

Here's the bottom line, though, for long-term investors desiring to see the biggest return on their investment: I regard silver at 1/50th to 1/60th the price of gold as a very favorable bargain-range buying opportunity at this stage of the secular bull market. In my view, it's worth taking advantage of, while it lasts.

The fundamentals for precious metals have not changed. Owning physical gold or silver today is more important than ever, and investors should try not to allow volatile price action in the precious metals markets to wear them out. Relax, stay the course, and continue to load up at these discounted levels. In the end, you'll be glad you did.