Gold and silver prices rallied last week, along with share prices. Investors speculated on increased odds of more stimulus – both here in the U.S. and in Europe.

Central bankers have hinted that they may be getting ready to print more currency. This week, we'll see if any of the talk translates into action – both the Fed Open Market Committee and the European Central Bank will meet.

Gold outperformed this week, gaining $40/oz (2.5%) and closing well above the important $1600 level at $1625. Silver rose $.43/oz (1.5%) and finished at $27.82. After months of consolidation and range-bound trading, both metals have put in a solid base, with mostly strong hands remaining invested.

If we get market-driving news that attracts the speculative crowd back to the long side of the metals trade, we can expect some significant upside moves.

Platinum and Palladium underperformed once again. Platinum fell $14/oz (1%) and settled at $1407, making its discount to the gold price over $200/oz. Palladium traded nearly flat – dropping $2/oz to $577. The grim outlook for manufacturing worldwide more than offset the optimism traders felt about additional central bank easing.

ECB's Draghi Talks Himself into A Corner

The catalyst driving gold and silver prices is a familiar one. For months, traders have been hanging on every word uttered by central bankers and bureaucrats and laying bets on whether more stimulus is imminent or not. ECB head Mario Draghi told the world that he stands ready to do "whatever it takes to preserve the Euro...believe me, it will be enough." 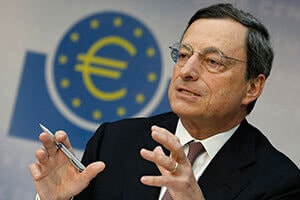 The ECB's Mario Draghi appears ready to do
what central bankers do best: create inflation.

This kind of talk doesn't just move the precious metals markets, it moves the far larger equity markets. The S&P 500 index rose 4% last week and has now recovered most of the losses put in over the past 2 months.

A tiny minority of investors own precious metals, but investors around the world own trillions of dollars' worth of stocks. And this week's rise in equity prices is further evidence that stock markets are hopelessly addicted to stimulus. Prices shot up despite a horrific report on existing home sales and tepid GDP numbers in the U.S. Fundamentals continue to deteriorate, but the markets love it – it improves the odds that central banks will print and stimulate.

But reality is that most of the world is mired in persistent economic weakness, and recovery is nowhere in sight. There is only the prospect of easing and stimulus to support the equity markets. Central bankers are in a bit of a corner. Failure to deliver on promises like Draghi's will crush the equity markets. More monetary stimulus, which we fully expect, should result in higher energy and food prices – and much higher precious metals prices.