Silver surged $1.40 and gold jumped $40/oz on Thursday as Fed Chairman Bernanke delivered just what the gold and silver markets were looking for: "Money from Helicopters" Ben Bernanke trotted out a new program for the central bank to issue new currency and buy $40 billion in mortgage-backed securities every month. 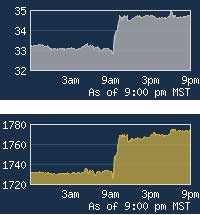 Silver jumped nearly $1.50
and gold rose $35 in the minutes
following the Fed's announcement.

The new Federal Reserve money-printing program is open ended – it doesn't have the end date that the Fed has used to limit previous campaigns. Further, Bernanke left no question that they will accelerate the monetary expansion if they feel more stimulus is warranted.

The Chairman stated, " the outlook for the labor market does not improve substantially, the Committee will continue its purchases of agency mortgage-backed securities, undertake additional asset purchases, and employ its other policy tools as appropriate until such improvement is achieved in a context of price stability."

The $40 billion per month they announced yesterday could be $80 billion in a few months. There are no limits this time around – either in amount or duration.

Bernanke and the Fed justified their actions because of high unemployment and anemic economic growth, but that's just cover. The trillions of dollars the Fed printed in prior iterations of "quantitative easing" (QE) haven't put a dent in unemployment. The rate remains north of 8% after 4 years – the most persistent stretch since the Great Depression.

And all that "stimulus" has done precious little to boost the economy. Economic growth isn't just anemic, it's negative when adjusted with an honest (non-BLS) inflation rate.

Bernanke may be keying on the unemployment rate, but in truth his motivations yesterday are the same as they were 4 years ago when he pointed at the Financial Crisis and launched the first QE. ?He's following the Fed's unspoken mandate. Not the one he proclaims publicly – promoting "pricing stability" and maintaining "full employment." The real goals are to pump up the stock market, boost the balance sheets of the mega banks that literally own the Federal Reserve, and facilitate unending big government deficit spending.

All of these machinations point to one thing – the dollar is in trouble and gold and silver are the place to be. If you haven't established a solid position in gold and silver bullion – at least 20% of your total assets – then consider taking action now. Prices are still well below their all-time highs.