Banging Our Heads against the Debt Ceiling 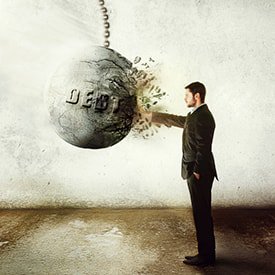 Gold and silver enter this week bouncing off near-term support levels after having tested them last week.

On Friday, the headline unemployment rate dropped to 7.7% – a better jobs report than expected. The metals markets initially got crushed – true to form based on the inverse correlation we've seen between jobs numbers and metals prices recently. But prices rebounded within minutes and wound up with modest gains on the day.

This morning investors remain focused on discussions in Washington, DC surrounding the fiscal cliff, but almost no one expects much in the way of progress this week.

Debt Crisis about to Enter the Next Phase?

Four years have elapsed since the financial crisis of 2008 focused the national debate on insurmountable levels of debt. The focus appears to be fading. Today, even hardcore advocates for reform are feeling a bit tired, and headlines on the subject are losing their ability to capture people's attention. That makes this moment potentially one of the most dangerous we've experienced during the evolving crisis.

Passing such a bill would have been nearly impossible even a year ago. Now they just might get it done.

The debt ceiling elimination bill didn't pass, but it will very likely be back up for another vote soon. If they succeed, it's an event historians may well look back upon as the point the ailing dollar went from critical to terminal.

Naturally, the President and his cohorts are framing the debt limit debate as a device Republicans use for purposes of political theater. At some level, we have to agree. Certainly Republican leaders posture as if they value restraint on government's ability to borrow and spend, but in nearly 100 years, they have yet to actually deny an increase.

Total elimination of the debt ceiling would have far-reaching significance. Why? Because the Administration is proposing unlimited issuance of new debt even as there is almost no appetite for the Treasuries currently flooding the market.

A recent Bloomberg story highlighted estimates that the Federal Reserve, not investors, will purchase 90% of Treasuries now planned for the coming year.

Incredibly, the article anticipates a "scarcity" in Treasuries as the Fed wades even deeper into the market and snaps them up. We think its irrefutable evidence the private sector (and major foreign buyers such as China) are no longer willing to pretend the dollar is going to hold its value. If the Fed must conjure dollars into existence to purchase 90% of Treasuries, they are the opposite of scarce.

Now enter the Treasury – seeking unlimited borrowing capacity just as the Federal Reserve, in its recent announcement of QE3, claimed authority for unlimited money creation. This is a prescription for disaster!

Metals investors need to watch developments closely. Eliminating the debt ceiling would shield elected representatives from having to go on record to saddle their constituents with more debt. The national debt would go up, and up, and up automatically in perpetuity.

If history is any guide, when a government borrows in unlimited quantities and gets its own central bank to buy 90% of its newly issued debt, a currency crisis won't be far behind.

We expect talk surrounding the "fiscal cliff" to continue to dominate investors' attention. Here is a list of scheduled events likely to impact precious metals markets this week: