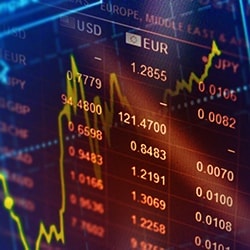 Gold and silver enter the new week range-bound but threatening the upper end of their near-term trading ranges. The markets continue to look for a driver to propel them through the key levels of $1,700/oz for gold and $32.50 for silver.

The disappointing jobs report and the release of a negative GDP number for Q4 2012 resulted in stocks making a new 5-year high. Paradoxically, bad news about economic fundamentals tends to be good news for the markets these days, as it increases the odds that Fed Chairman Ben Bernanke and Company will keep the printing presses running full tilt.

Lots of people, including Money Metals Exchange customers, are commenting on the strength of the stock markets. Certainly equities are the current beneficiaries of all the newly minted dollars sloshing around in the big banks and Wall Street -- courtesy of the Federal Reserve. Higher stock prices are just another manifestation of the inflation in our money supply.

Kyle Bass of Hayman Capital made a fortune correctly predicting the 2008 Financial Crisis and understands the effects of Fed policy better than most. He isn't surprised to see stocks going higher, but he made an important point last week on CNBC. "Zimbabwe's stock market was the best performer this decade – but your entire portfolio now buys you 3 eggs."

And as Chris Martenson of The Crash Course and PeakProsperity.com so eloquently noted in our exclusive interview in this past Friday's Weekly Market Wrap Podcast,"holding tangible wealth, of which gold and silver are some of the primary examples for me, has been a winning strategy during periods of great crashing deflations and also inflations. Either way, that's been your best chance to preserve your wealth and to sidestep where we are potentially heading."

The U.S. Mint production of bullion coins is off to quite a start for 2013. The Mint set an all-time monthly record in sales for silver American Eagles, despite its temporary halt in accepting new orders announced mid-month. For the month, 7,498,000 coins were sold -- demolishing the prior record set in January 2011 at 6,422,000.

The Mint resumed shipments of silver Eagles last week, and Money Metals is once again taking orders. Premiums are slightly higher than before the halt, but not significantly. The Mint is limiting shipments, so supplies are tighter. For the moment, stockpiles appear adequate, and Money Metals will be delivering promptly.

The financial media will be focused on the strength in U.S. and world stock markets. Corporate earnings reports for Q4 2012 are winding down, and we may see pundits resume talking about Congress. The debt-ceiling debate was postponed, but not for very long.

This week looks to be quiet in terms of scheduled events impacting precious metals: