Gold and silver found a bit of strength last week in the futures market and the charts improved slightly. This week, prices will likely rise or fall based on speculation leading up to the FOMC meeting, followed by the actual announcement on Wednesday.

Should officials surprise markets by committing to a withdrawal of stimulus -- including specifics on timing and amount -- spot prices may suffer. Most expect the Fed to once again punt on the issue.

The retail bullion markets are relatively quiet this month, but 2013 will go into the books as a remarkable year. Never before has demand for physical metal diverged so sharply from the paper markets. Massive selling in the paper markets -- futures and precious metals ETFs -- meant spot prices suffered even as demand in the physical markets globally broke records, becoming nearly unmanageable at times.

There may only be one institution in the world that would choose to stop all production of a record-selling product and spend a month making minor tooling changes; the U.S. Mint! US Mint Seal

Should we really be surprised the feds stink at producing a product? That's right, bureaucrats have shut down production of silver American Eagles. Mint officials will switch to the 2014 dies and resume delivery of their most popular US mint coins for sale in mid-January, 2014. Odds are the U.S. Mint will be unable to meet demand until March, and supply disruptions are likely to continue.

The effect of this mismanagement is customers must pay higher prices if they want the product. Premiums for the coins began rising 3 weeks ago as markets anticipated the disruption in supply.

In fact, the recent jump in premiums is just the latest up-cycle in what has been a volatile year.

Demand in the first two weeks of 2013 quickly overwhelmed the Mint. Officials responded by declaring a halt in production for nearly two weeks to "catch up." Demand accelerated once again in April and May. Premiums rose above $5.00/oz. 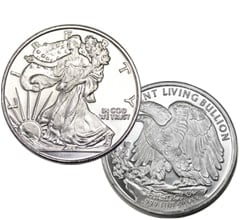 Why pay huge premiums for
Silver Eagles? Our similar
looking .999 silver rounds are a
much better value.

Many responsible metals dealers, including Money Metals Exchange, chose to stop taking orders for the overpriced product for a period of time, because firm commitments could not be made regarding delivery time. (Some dealers took the customers' money, and then forced them to wait up to two months for delivery.)

Most might expect the U.S. Mint to add shifts, line up additional suppliers for silver blanks, and find other ways to meet the demand. But the program is managed by people largely unconcerned with the imperatives driving private sector businesses. (But private mints have been picking up market share as dealers like Money Metals ramp up sales of low-priced silver rounds and bars.)

Despite this, the American Eagles remain the most popular bullion coins in the world. It is a potent combination for premiums; big spikes in demand being met by bureaucrats who simply throw up their hands and stop taking orders.

This year's demand is extraordinary, but the Mint has periodically struggled to meet growing demand for Silver Eagles for years. At least it presents an interesting opportunity for investors to speculate on premiums by trying to buy Eagles when premiums are low and sell when premiums spike, converting the cash into another silver bullion item with a lower premium and ending up with more ounces.