Urgent Warning on Bitcoin: Promoters Pushing It Like a Penny Stock 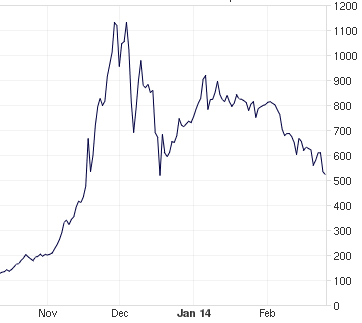 Bitcoin's chart looks like a penny stock
right after its promoters send out 10
million emails.

Not long ago, we gave you the inside skinny on Bitcoin -- both its strengths and weaknesses. However, the deluge of promotional emails and ads we've witnessed in the past few weeks has compelled us to revisit the issue.

Free-market analyst Bill Fleckenstein, an MSNcolumnist and investment manager, appeared onKWN last week and labeled the cryptocurrency a "chain letter" that has even less backing than the U.S. dollar.

At least the dollar has a government behind it that can raise taxes to shore it up, Fleckenstein noted. A far cry from something like gold or silver, Bitcoin has no tangible backing of any kind and relies purely on persuading others to hand over things of value in exchange for electronic entries.

Heavy internet marketing by certain newsletter publishers has helped fuel a 500% increase in the "value" of Bitcoin in the past two months. The drop could be just as dramatic.

The situation reminds us of those penny stocks you occasionally see promoted. Yes, adept speculators can jump in, get out, and make some real money. But many will lose most or all of their investment -- depending on which particular day they acted on the "hot tip."

If you are considering putting one thin dime into Bitcoin, please get the facts first.Caveat emptor!