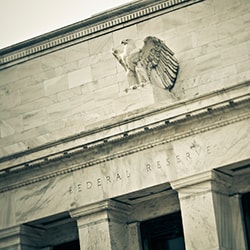 The U.S. dollar strengthened on turmoil in emerging markets, such as Argentina and the Ukraine, as well as continued flight from U.S. equities. And the Fed announced an additional $10 billion per month in stimulus reduction. The combination was enough to break a 5-week winning streak in gold, which lost 2% by the Friday close.

The more precious metals get sold off in the futures markets, the greater the quantity of physical metal gets transferred into strong hands. Money Metals' latest podcast features an eye-opening interview on this subject with professional metals trader Tres Knippa.

"The larger story here is if I wanted to own gold I certainly wouldn't go to the paper market. In my mind I would always err going to that physical and I actually have a theory for where a lot of this physical gold is going. That theory is it's going to China,"he said.

The Fed Tapers Again… Now What?

Ben Bernanke presided over his last FOMC meeting as Fed Chairman last week. The most prolific money printer ever to man the helm made his exit into history with a decision to taper his Quantitative Easing program by another $10 billion per month.

The timing of his departure may be impeccable. He's been given credit for a “recovery” of the U.S. economy, and even though he oversaw the worst job market in a generation, he may avoid much of the blame.

The Fed announced the first $10 billion in tapering in December. It isn't taking long for markets to exhibit withdrawal symptoms from their addiction to Fed stimulus. U.S. stock markets are off to their worst start in nearly a decade. The housing market, another strong performer in the past year, is also beginning to dim.

Bernanke's successor, Janet Yellen, has formally taken power. We have covered Yellen's track record extensively. She is a die-hard believer in the effectiveness of Fed stimulus -- she consistently advocates the Fed do more to loosen monetary policy in a quest for growth and lower unemployment. Should economic indicators weaken, there is little question Yellen will go to extraordinary lengths to provide support.