BREAKING: Investors Fill Their Pots of Gold as Dollar Sags...

Precious metals prices are benefiting nicely from weakness in the dollar and the ongoing potential for conflict in the Ukraine.

The U.S. Dollar Index has been trending lower since last July. On this St. Patrick's Day, the greenback sits just above its key support level of 79. And investors appear to finally be remembering the go-to safe-haven alternative to the dollar: gold.

Precious metals are also getting a boost by virtuous cycle. Gold and silver are among the best performing asset classes of the year. Gold is up nearly 15% with its price currently sitting at 6-month highs.

Meanwhile, U.S. equities are losing some of their shine. The S&P 500 is virtually flat for the year. Gold and silver ETF's, which had been liquidating inventories, are accumulating once again.

Investors should keep an eye on the bond market. U.S. Treasuries, which also traditionally benefit from safe-haven buying, have been generally stronger since the first of the year. Investors appear unconvinced the Fed will continue reducing its stimulus measures, and turmoil in the Ukraine, and the surrounding geopolitics, are adding a new element for investors to consider. More on that below... 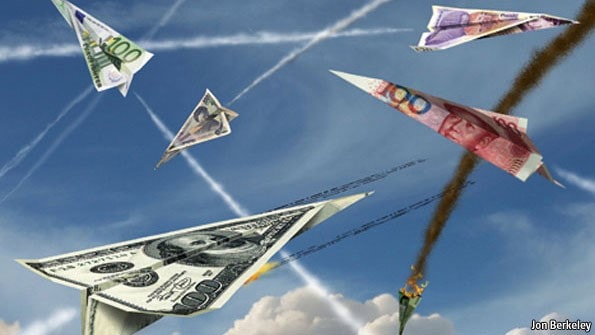 Unfolding events in the Ukraine have created a major foreign policy challenge for State Department officials and the President. The Obama Administration reportedly sent several billion dollars to organizations in Ukraine before pro-European Union forces staged their coup, but Russia appears to be undeterred in reclaiming the Crimea region.

he ongoing turmoil in Ukraine, Iraq, Afghanistan, Libya, and Syria all suggest the U.S. is losing influence. An increasing number of Americans are growing tired of paying for conflicts around the globe, and political support for new military adventures is waning.

But there is another consideration with implications for metals investors. The U.S. government's borrowing needs make it financially dependent on nations such as Russia and China, who buy and hold massive amounts of Treasuries.

Russian President Vladimir Putin and the Chinese have been warning the U.S. to butt-out of the Ukraine and to not impose sanctions. Perhaps in anticipation of actions by the Obama Administration to lock down Russian assets on deposit at the Federal Reserve and other banks, Russia has been shedding its holdings in recent weeks. The chart below is a shot across the bow: 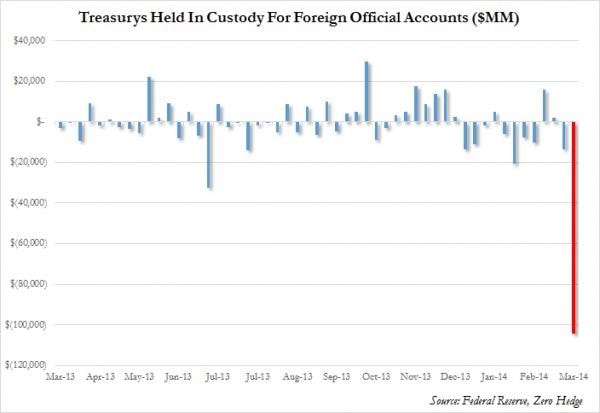 The U.S. finds itself in a tough spot. The Fed posture is to “taper” -- to wind down its own purchases of U.S. debt. But the Administration's stance in the Ukraine risks antagonizing some of the largest outside buyers of Treasuries.

Geopolitical developments like these could lead to carnage in the bond and currency markets, sparking buying of precious metals.