Should You Worry About Government Confiscation of Your Bullion? 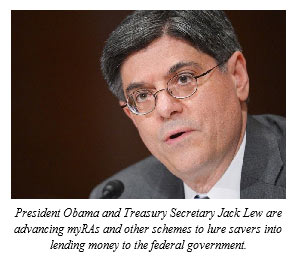 As the federal government grows more authoritarian and more insolvent, investors should indeed worry about what kind of desperate measures may be coming.

President Obama has already proposed a new retirement account for low and middle income workers called a “myRA” which will require participants to lend funds to the federal government. Another form of “confiscation" already under discussion involves limitations on tax benefits tied to IRAs and 401(k)s – and potentially even requirements that U.S. debt be purchased within those accounts.

Indeed, stealth government confiscation is already occurring in the form of the “inflation tax,” whereby savers lose purchasing power on their dollars due to runaway spending, borrowing, and money printing by America's central planners. And, of course, there is the confiscation from our progressive system of taxation which imposes ever higher rates of tax on nominal earnings. 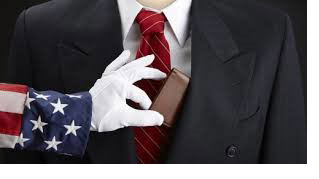 We strongly believe that forgoing or limiting your bullion purchases based on fears of outright government confiscation is counterproductive. Military critics often use the expression "preparing to fight the last war" when discussing the tendency for strategists to focus overmuch on the enemy's prior tactics at the expense of preparing for new ones. Letting the threat of confiscation deter you from building a position in physical gold and silver is preparing to fight the last war.

We live in a very different world today. Here are some key reasons to ready yourself for a different kind of attack:

The latter has already been demonstrated by recent events. During the banking crisis in Cyprus, officials took advantage of technology to launch a surprise attack on their citizens. Cypriots woke up one morning to find they no longer controlled the "cash" held in their banks. Confiscation took the form of electronically seizing bank accounts and limiting ATM withdrawals to €100 per day.

Under federal laws, the U.S. government claims the authority to seize ANY asset of any kind in times of national emergency. So confiscation is a real threat, and no asset is safe from a distressed government. 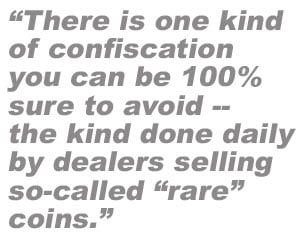 But investors should defend themselves by exchanging assets that are easiest for bureaucrats to confiscate (paper assets held electronically in banks and brokerage accounts) for assets that are difficult to grab. Easy-to-transport, easy-to-hide physical bullion stored securely and privately is the best place we can think of to start.

But there is one kind of confiscation you can be 100% sure to avoid -- the kind done daily by dealers selling so-called “rare” coins. Unless you are an experienced collector with money to blow, you should avoid all kinds of “rare,” “numismatic,” and commemorative coins. Failing to do so virtually guarantees that some portion of your investment will be confiscated in the form of extortionate premiums which are usually 35% or higher than the coins' resale value and often many times the coins' actual melt value.