Spot prices for gold and silver fell sharply last week and lost important support levels. Without a quick rally, technical traders will be expecting prices to fall further this week.

Gold dropped $42/oz (3.3%) for the week and silver declined $.58 (3%). Gold spot prices rest at the lowest levels since January, and the silver price is very near the lows it saw one year ago and, before that, four years ago.

The platinum group metals continue to outperform. In the wake of the ongoing struggles for gold and silver prices, palladium eked out a small gain last week, while platinum fell slightly.

Investors perceived tensions fading a bit in Ukraine, as a new president was chosen in elections on May 25th. The new leader, Petro Poroshenko, appears to more palatable to Vladimir Putin and the Russian leadership who have now withdrawn troops from the border.

We could also see some seasonal weakness in precious metals over the next couple months. Gold and silver markets are typically quiet during the summer. However, in recent years, the traditional price patterns during various seasons of the year have failed to manifest – so it is too early to tell.

It currently takes about 67 ounces of silver to buy one ounce of gold. This number could go higher, but we wouldn't bet on it. Spikes higher tend to happen during unusual and unpredictable events -- such as the financial crisis of 2008, when the ratio surged briefly above 80 and spent a few months above 70.

On a historical basis, the gold:silver ratio is moving toward an extreme. Except for the decade between 1987 and 1997, the current level is much higher than average. 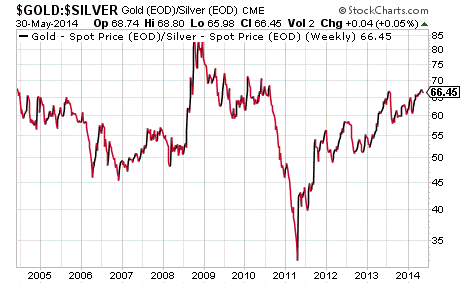 The good news is that a top in the gold:silver ratio is also likely to signal a bottom in gold and silver prices.

The reason is that silver usually underperforms when the precious metals markets are in a bear cycle, as we have seen over the past 3 years. The ratio bottomed at 33 in 2011 when silver reached $49/oz, and it has been rising as silver prices have fallen to roughly $19/oz, while gold's decline has been far less dramatic.

We generally recommend investors favor silver at these levels when making new purchases. And for anyone whose holdings consist primarily of gold, it can make sense to swap some of that gold for silver at this time -- perhaps most of it later on if we see a sudden spike higher in the ratio.

Those who want to make the swap can count on Money Metals Exchange to make it easy. We'll lock prices on the gold you wish to sell and the silver you wish to buy simultaneously. We'll even pay for the cost to ship and insure your silver as soon as we receive your gold.

That's right, you get FREE SHIPPING from Money Metals if you swap gold for silver!

For more insight about the gold:silver ratio, what it signifies, and where it may end up by the end of the precious metals bull market, listen to Money Metals's brand-new exclusive interview with silver guru David Morgan.

The price action in gold and silver futures markets masks some interesting developments in the underlying demand for physical metal.

Demand for gold bullion coins, rounds, and bars is down significantly from a year ago. Sales of gold American Eagle coins by the U.S. Mint through May -- 217,500 ounces -- amount to less than half the total for the same period last year -- 572,000 ounces. And gold ETF holdings, which shrank by 880 tons in 2013, have fallen even further to the lowest levels since 2009. However, gold demand out of China remains strong and is expected to grow significantly in the years ahead.

Meanwhile, demand for silver is healthier than ever.

The Silver Institute recently reported statistics for 2013 -- a 13% gain in overall demand and a new record. Purchases of silver coins rose 38%, and bar holdings in silver ETFs rose 48 tons.

Last year's demand for silver bullion set a record, but if the demand through May holds, that record won't last. Year-to-date sales of silver American Eagle coins are basically unchanged at 21.5 million ounces versus last year, but ETF holdings have risen significantly.

It appears investors are anticipating an end to the bear cycle in precious metals and positioning for the next leg higher, a scenario in which silver will outperform (if history is any guide).