Precious metals opened modestly higher this morning, as investors keep an eye on the turmoil in the Middle East and Ukraine.

News of a missile attack on a passenger airline flying over Ukraine, the Israeli invasion of Gaza, and hawkish comments from Fed officials have triggered volatility in the metals markets in recent days. 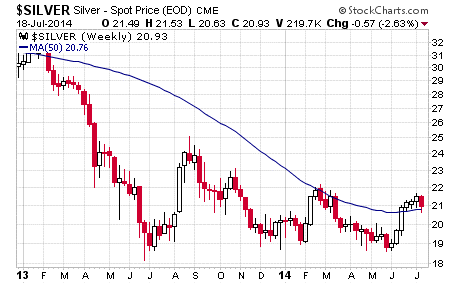 Kansas City Federal Reserve Bank President Esther George said a strengthening U.S. economy and job market means the Fed should begin raising interest rates “relatively soon.” Janet Yellen made similar comments to Congress, stating the Fed would respond to any unexpected gains in employment by raising rates but then -- at the same time -- reaffirmed the Fed's commitment to the current zero interest rate policy (ZIRP) until the effects of the financial crisis are “completely gone.”

Although gold and silver each suffered losses of greater than 2% last week, both metals closed slightly above their 50-week moving averages. The bullish technical momentum established last month remains in force. In another sign of underlying bullishness, the high-risk gold mining stocks, which often serve as a leading indicator for metals prices, pared losses and showed relative strength versus gold.

The CME Group and Thomson Reuters Corp. were chosen to launch the new mechanism for establishing the daily silver benchmark price known as the “silver fix.”

Starting August 15th, the new system incorporates electronic trading and a broader range of participants to replace the 117-year-old process in which a handful of member banks established the key benchmark during a midday conference call.

The new system promises to be more transparent and less prone to manipulation -- welcome news for everyone but the banks and other insiders who appear to have enjoyed a significant trading advantage in the outgoing system.

According to Andrew Caminschi, a researcher at the University of Western Australia, the best you can say of the current London Silver Fixing is that it is ending soon! 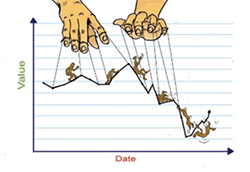 Caminschi authored a new report on daily fixing process and found flaws similar to those he discovered with the daily gold fixing. His report on the gold fixing was published last summer and has since been supported by findings of blatant manipulation, including a Barclays trader who was busted for cheating the bank's own customer by tricking prices lower.

Caminschi analyzed 14 years of market data and found that mine operators and others who sell silver using the benchmark fix price on average get stuck with the lowest price of the day.

The bankers who establish the fix and other participants with insider knowledge enjoy a significant trading advantage. These intermediaries step in as buyers and profit by selling at higher prices immediately after. The downward bias in the price typically unwinds within an hour. The trading advantage is modest at 10-12 basis points (0.1% - 0.12%), but it represents an enormous return for insiders using leverage, or when annualized.

Caminschi's reports played a role in the demise of the silver fixing. The publishing of his data and the accompanying regulatory scrutiny and fines appears to have caused Deutsche Bank to put their seat in the silver fixing committee up for sale. And the same scrutiny likely discouraged anyone from bidding for that seat. Deutsche Bank ultimately just resigned, leaving just two member banks -- not enough to continue.