How much do you think your gold and silver are worth?

It's natural to value that worth in dollars, since you paid a certain price in dollars for your coins and bars. That keeps it simple.

A more advantageous way to value your metals, however, goes beyond that simple accounting.

Instead of calculating the worth of your gold and silver in dollars, count your precious metals in ounces. This frees you from fretting when the dollar price is down, which should only be a welcome signal to add to your holdings anyway.

“Buy low, sell high” is the age-old advice to all investors, but there are far too many buyers who wait until prices are rising before getting excited. Many successful investors make their money off those who buy high and then sell low when prices fall.

When you gauge your wealth in ounces instead of dollars, you win hands down because you've taken yourself out of that game.

Measure Your Wealth in Ounces, Not Dollars

I value my precious metal holdings in the same manner I value my home. I have only a general idea what my home is worth in dollars. I'd need a costly appraisal to pin that down. Since it's not for sale, a dollar number means nothing to me. I don't care if the market price is higher or lower than six months ago or a year ago. My home has the more important values to me of security, shelter, and sentiment.

Metal can be melted and recast into bars, coins, or jewelry, but the metal itself is the same stuff that sat in the ground for eons before it was mined and refined. An ounce equals an ounce, a gram a gram, the same as always. It offers you the same security, shelter, and sentiment it's provided mankind since antiquity.

That cannot be said about a paper dollar. It hasn't always had the same worth, not since the U.S. went off the gold standard 80 years ago. That dollar bill actually began losing value the moment the Federal Reserve began churning out paper money 100 years ago. It's losing value right now as you read this – and that loss will continue.

When you value your metals in ounces and not dollars, you'll see your paper dollar for what it's worth – a mere fraction of an ounce of gold or silver. You'll discover that fraction is becoming smaller over time. 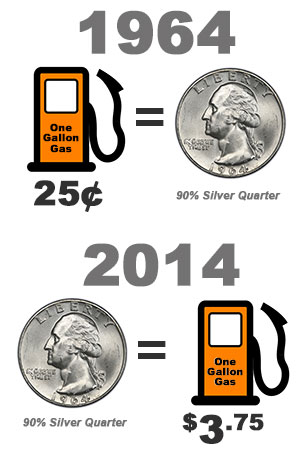 My favorite illustration is the 25 cent gallon of gas. In 1964, a gallon of regular gas in the U.S. averaged 25 cents. Pre 1965 dimes, quarters, and halves were still made of 90% silver in 1964, the last year the U.S. minted 90% silver coinage for circulation. To buy one gallon of gas, you paid with a silver quarter. Fifty years ago, that silver quarter and that gallon of gas had equal market value.

Today, the silver in that quarter is valued in paper dollars at about $3.75, which is also the price I've paid recently for gas. That $3.75 price tag is fifteen times the 1964 cost, meaning my paper dollar today is worth less than 7% of its former self 50 years ago.

But the buying power locked in that silver quarter – its true value – is exactly the same as 50 years ago, and today it will still pay for a gallon of gas. The buying power of the silver did not change. It was the dollar that changed.

Metal and dollar values don't march in lockstep day by day with everyday prices. But over time, the illustration works perfectly.

It's a mathematical and historical certainty the modern, debased dollar is facing extinction, while gold and silver have a track record of preserving wealth for thousands of years. When you value metals in dollars, you miss seeing their true value as savings and insurance against economic disaster.

Decide for yourself which has the truly steady value. Let's say 50 years ago, 1964, your grandfather bequeathed you an inheritance worth $1,000, which he put in a pretty box with your name on it. At this moment, you are about to open that box…

Would you be happy to find his personal check dated 1964 made payable to you; would you rather find ten $100 Federal Reserve Notes; or would you prefer to find that thousand bucks in the form of 4,000 silver quarters, the steady constant value of 715 ounces of silver, with a current dollar number north of $15,000?

Would your choice be the same if you were putting your wealth away today for an heir to receive in ten, twenty, or fifty years? Or for your own retirement, or for a rainy day?

Keep buying your gold and silver and put it safely away. In these times of debased currency, rising inflation, higher taxes, and uncertainty everywhere, holding precious metals is more important than ever. You can be assured your precious metals will maintain the value of the dollar price you paid throughout the dangerous years ahead, while your other paper dollars still in your pocket become smaller and smaller fractions of themselves.