You've heard stories of large banks manipulating gold and silver prices down. Well, to a large extent they're true. Many fraudulent schemes have recently been exposed and admitted while regulators jawbone about reforms. The worst price manipulation -- orchestrated by the U.S. government -- is still ongoing.

Gold and silver prices are forced artificially low to create the illusion that metals have little value… and the volatility scares off new buyers. The U.S. government and its allies on Wall Street play this dangerous game to engineer artificial confidence in the dollar.

In past years, governments and central banks depressed gold and silver prices by sending massive amounts of physical metal to market. This current scheme also floods the market with gold and silver, but most of it does not exist. It's just a gold and silver mirage based on paper contracts. Bullion banks are government's complicit brokers, selling their mix of real physical and pretend paper gold and silver through contracted futures, options, and exchange traded funds. Banks still put a few bars of real gold and silver in the showroom window, but cram the warehouse with paper promises stacked to the rafters, which banks know they can never deliver.

The leverage in precious metals is even more extreme than our fractional reserve banking system. Testimony in federal hearings in 2010 confirmed only one ounce of real gold exists for every hundred ounces of paper gold offered for sale. The silver market operates in the same way.

If you sold imaginary metal, you would be prosecuted. The government exempts itself and its banker friends from our laws.

Most participants in this scheme bet strictly on price direction. They don't accumulate or care about owning physical precious metals long term. They take profits in cash.

The Achilles Heel, as in all previous manipulations, is a lack of real gold for those who demand it. That day is approaching because real gold for sale is disappearing. As global economies falter, more will demand real metal.

Depressed prices for the past three years have accelerated the sweep of enormous wealth from Western hands into Eastern vaults, not coming back to market for decades (if ever). Many knowledgeable experts who’ve spent their careers studying gold believe Western vaults, including the major COMEX and LBMA warehouses, have experienced massive outflows of physical gold.

Since the 1930s, the U.S. has stored the gold of other nations, supposedly for security during World War II and the Cold War. If Fort Knox has any gold at all, the question is, who owns it?

The smoking gun is industrial powerhouse Germany, which last year joined a growing list of nations asking for their gold. Germany wanted its 1,500 tons back. It received only 5 tons and was told to wait 7 years for another 300 tons. The nation has suddenly backed away from its gold repatriation plans, possibly under pressure from the U.S. or the Federal Reserve. Germany's difficulty in getting America to disgorge its gold parallels Washington's 60-year refusal to publicly account for America's gold.

UPDATE: Recently the German Central Bank has repatriated 120 tonnes of gold from both France and the NY Fed. It seems like they will be attempting to intensify their rate of repatriation in 2015.

Gold disappearing into strong hands through normal market forces will end the manipulation eventually. But it would take only one buyer, hostile to U.S. market policies, to put the short sellers out of business overnight. This would be a tactic of financial warfare to attack our markets and our currency, not a shot at making profits.

China and Russia have happily taken advantage of bullion bank fire sales to accumulate tons of gold. Both demand real gold, not dollar settlements. They buy hand over fist, and they don't re-sell.

Both nations accuse the U.S. of destructive economic policies and aggressively negotiate international agreements to sidestep and weaken the dollar.

China is the world's top gold consumer, a major mining producer and holds massive gold reserves. China believes it, not the U.S., should be running the global gold market. China has studied the suppression scheme and called it fraudulent. China is developing its own competitive market exchanges.

Russia ranks third in gold production and proudly publicizes its gold buildup regularly. Russia is accumulating more gold and negotiating trade deals with China and other allies that bypass the U.S. petro-dollar as part of its counter-measures to economic sanctions over Ukraine. A top Putin adviser has warned Russia could crash U.S. bond and stock markets, hinting at cyber warfare.

"Full Faith and Credit" says it all. There's nothing else backing the dollar. A sharply rising gold market would destroy the dollar's “full faith” as nothing else could. The U.S. would be laid bare as fecklessly impotent with nowhere to hide.

Whatever forces are suppressing gold and silver below true market values do so at great peril. Sacrificing gold at giveaway prices to increasingly unfriendly nations is the blaring alarm of a desperate U.S. government with its back to the wall, gambling a heavy wager to prop up a failing dollar and disguise failing policies.

Artificially Depressed Gold and Silver Prices: A Gift to Those Who Understand What’s Happening 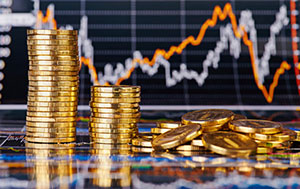 As Western gold vaults empty, as unwanted dollars decay through excessive printing, and as international tensions rise, both China's and Russia's interests rest ultimately with much higher prices for physical gold and silver bullion– learn how to buy gold and fractional silver rounds and bars.

Prices at three year lows will not – cannot – last. Artificially low prices distort market signals and reduce investment in developing new sources of supply. Mining is a capital intensive business with very long lead times. As mining output declines, it could still take years for mining companies to ramp up – with metals prices skyrocketing in the meantime.

The double-edged sword of gold and silver price manipulation offers a gift to buyers who understand today's prices are unsustainable. Real gold bars/coins and silver have protected wealth for centuries during chaotic times, always thankfully appreciated by those who own them, and desperately coveted by those who are late to see their value.