Why Gold and Silver Are Good News Metals

Analysts and some precious metals’ sellers tend to focus on the “insurance” aspect of owning precious metals. They point out that having some in your possession helps protect your wealth in case of inflation, political unrest, or for use as an “alternate currency” during a natural disaster, war, etc.

Of course, these are all valid reasons for purchasing and holding “the precious metals four” – gold, silver, platinum, and palladium.

But the benefits go far beyond the insurance and assurance aspects. It just makes all around good sense. For you see, each of these are in their own way, “good news” metals.

As the developing world’s wealth increases, hundreds of millions of people have more disposable income – money left over after covering life’s basic expenses. For millennia, a significant portion has always been directed and will continue to find its way into precious metals’ ownership.

In Asia, Indians regard gold and silver as “bank accounts in your hand,” dowries for exchange upon marriage, or the raw material for the creation of jewelry having lasting beauty. In China, where the savings rate can be as high as 40% of income, precious metals fulfill the timeless role of asset preservation.

In North America, Eagle and Maple Leaf sales continue to set records. So far this year, over 26 million American Silver Eagles have been purchased - on track to set an annual record – the most since their introduction in 1986. 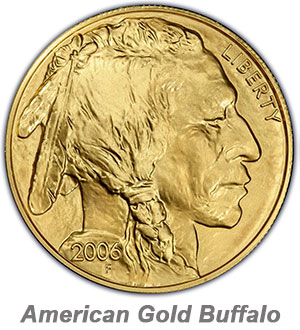 When my daughter graduated from high school in 2000, my gift to her was a one ounce gold Krugerrand – for which I paid $275.

When America’s first pure gold coin, the 24 carat American Buffalo was introduced in 2006, I bought one for $800 for each of my children.

All of these coins are absolutely beautiful. They speak of our nation’s past. They bring a smile to the face of someone who holds them in their palm. They are a store of (increasing) value. They are a “physical reality” by which only the person who owns them can lay claim. They are a direct and enduring link to 5,000 years of history.

Industry Loves These Metals Too!

Governments are mandating phasing out of incandescent bulbs for supposedly more efficient fluorescent lighting. But fluorescents turn on slowly, produce a different quality of light, and still contain mercury – a neurotoxin harmful to both people and the environment.

At the same time, the Light-Emitting Diode (LED) is revolutionizing the lighting industry. It contains no mercury, generates little heat, lights instantly, and can last for 25 to 100 years! A 60 watt LED uses just 10 watts of power – 85% less than a traditional bulb. Continuing to decline in cost, they are replacing older methods in traffic intersection lights, residential and commercial lighting, flashlights, and headlamps.

Small amounts of gold and silver compounds are used in the soldering process. This is critical in forming a chemical bond with the gallium on the wafer’s surface of every LED, enabling the semiconductor to conduct electricity so it can function like an electronic device.

Each year over half of silver’s global production is earmarked for (mostly unrecoverable) use in hundreds, if not thousands of industrial applications which make our lives more productive, enjoyable, and safe. Add robust investment and jewelry demand, and you get a sense of where prices are headed over the next few years. This is good news!

Many of the world’s largest cities suffer from life-threatening levels of pollution generated by cars, trucks, and engines of all kinds. Catalytic converters use platinum and palladium to reduce these harmful emissions. But auto makers are now working to create emission-free vehicles.

These fuel cell vehicles (FCVs) use platinum as a catalyst to split hydrogen fuel into ions and electrons – virtually eliminating carbon monoxide emission – replacing it with water vapor! It is reported that each FCV produced will require at least one ounce of platinum. With supplies of platinum and palladium moving into multiple-year deficit territory, it’s not hard to see that their cost will rise as the forces of demand and supply collide. More good news.

Across cultures and historic time periods, anywhere in the world, precious metals have always been instantly accepted as money – unlike the eventual fate of virtually every artificially-created paper currency that has ever been circulated.

Yes, the “paper promises” in our wallet still buy us things, but consider this: In the United States since 1971, inflation has caused the dollar to lose 83% of its purchasing power – and that’s using the federal government’s own statistics that understate the real number. That means the greenback is barely worth 17 cents. Meanwhile, during that time, an ounce of gold or an ounce of silver has increased in value by well more than 1000%! (This new Money Metals infographic tells the story.)

"The fear trade got you into gold. The love trade will make you richer with it."

Frank Holmes has popularized the “2 doors” nature of gold’s attraction for buyers. He calls them the “fear trade” and the “love trade” – both powerful motivators. Stu Thomson understands what the future portends for owners, telling us, “The fear trade got you into gold. The love trade will make you richer with it.”

Yes, buy and hold the 4 precious metals to help protect your family from unexpected financial dislocations and perhaps earn a substantial profit. But do it also because of their timeless beauty, their abundant utility in industry, the warm feeling you get holding them in your hand… and the love exchanged when you share them with others.

For all of the above reasons, make sure you own one or more of these four increasingly precious metals. Don’t consider their purchase to be an expense. You’re simply exchanging a paper currency that continues to lose purchasing power, for real money which not only holds onto its value, but tends to increase over time. Now that proposition is good news in anyone’s book!