What Will the End of QE Mean for the Precious Metals?

This fall, the Federal Reserve is expected to finally wind down its latest monthly bond-buying program known as Quantitative Easing. What will the end of this $4 trillion (and counting) debacle mean for precious metals markets?

The answer may be, not much.

That’s not to say that gold and silver prices won’t move following the Fed’s final taper. But it is to say that widespread anticipation of QE’s end has already been priced into the markets.

The U.S. Dollar Index rallied strongly from July through September – in part on euro weakness and rising investor expectations that the economic data will come in strong enough to allow the Fed to terminate its bond-buying campaign. Nominal strength in the dollar exerted downward pressure on the PMs. Gold slumped, and silver fell even more sharply.

It’s worth recalling what happened when the current cycle of Quantitative Easing (officially, “QE3”) was announced in back September 2012. At the time, many analysts assumed that QE3 would provide an immediate boost to gold and silver prices. Instead, the metals markets responded counterintuitively. They declined for several months following the Fed’s announcement. 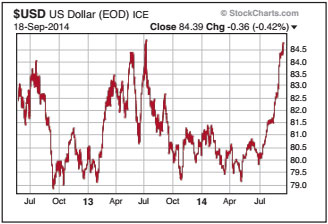 Fast forward to September 2014, and almost nobody expects the end of QE to be bullish for precious metals. In fact, speculative interest in gold and silver sits at multi-year lows. Hedge funds are collectively showing one of their lowest net long positions in the silver market on record.

The Fed’s final termination of QE won’t make the hot money crowd suddenly turn even more bearish on metals. That crowd has already positioned itself in anticipation of such an announcement. When the announcement comes, it could be a non-event for precious metals markets.

At the same time, it could spark a revolt against the U.S. stock and bond markets, which have heretofore been floating on a rising sea of Fed liquidity. Previous cessations of Federal Reserve stimulus programs have led to significant corrections in equity markets.

When the Fed Finally Hikes Rates, It Will Probably Be Chasing Inflation Higher

Of course, the Fed has no immediate plans to unload the more than $4 trillion in bonds it has accumulated on its balance sheet. Nor has it yet committed itself to actually raising its benchmark Federal funds rate, despite widespread expectations that it will do so by mid 2015.

Fed chair Janet Yellen stated recently, “The appropriate path of policy, the timing and pace of interest rate increases ought to -- and I believe will -- respond to unfolding economic developments. If those were to prove faster than the committee expects, it would be logical to expect a more rapid increase in the Fed funds rate. But the opposite also holds true.”

In other words, if the economic numbers (especially those related to employment) start coming in ugly, the Fed might refrain from raising rates – or even introduce a new stimulus program. Yellen has repeatedly indicated that stimulating job growth, as she sees it, takes precedence over fighting inflation.

That means the Federal Reserve may not raise rates until inflation begins spiraling out of control. In a Wall Street Journal survey of 30 economists, all but three expect the Fed to wait too long before raising short-term rates rather than move too soon.

In the months ahead, the financial media can be expected to speculate incessantly on the Fed’s next move and when it might come. Disciplined precious metals investors should ignore the Fed-gaming chatter and focus instead on what real interest rates are doing. 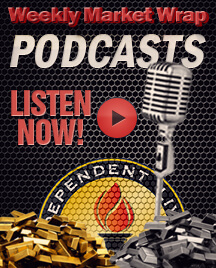 That’s what happened during the great precious metals bull run of the late 1970s. The Fed was perpetually behind the curve on rate hikes as inflation galloped higher.

Mike Gleason, a Director at Money Metals Exchange, noted in one of our weekly audio podcasts this summer, “During the great gold and silver bull run of the late 1970s, the Fed wasn’t slashing rates. It was doing the opposite. The Fed kept raising rates, but it didn’t get out ahead of inflation until [then-Fed Chairman] Paul Volcker stepped in and jacked rates up to punishing double-digit levels.”

Instead of fearing rate hikes, metals investors should actually look forward to the next rate-raising cycle. That’s when the biggest gains in gold and silver could come.

At some point, yes, real interest rates may turn positive and precious metals prices may get overextended to the upside. But neither situation exists under current market conditions.

Now remains a favorable period for savvy investors to accumulate physical precious metals while the herd isn’t paying attention, premiums on common bullion products are low, and spot prices remain significantly discounted from their highs of three years ago.