The news media focused heavily on a few high-profile Senate races. But one of the interesting dynamics that played out is that four of the states that elected Republican Senators – Alaska, Arkansas, Nebraska, and South Dakota – also approved ballot initiatives to raise the minimum wage.

There is a widespread perception – transcending party affiliation – that this economy is leaving ordinary workers behind. Real wages have been stagnant for the past three decades. Yes, the Federal Reserve’s stimulus programs have stimulated asset prices. Wages and job creation? Not so much.

Many political observers think Republicans in Congress will be goaded into raising the minimum wage. Free-market economists argue that a higher minimum wage would eliminate more low-end jobs. Interventionist economists say that mandating higher wages at the low end will ultimately trickle up and lift wages across the board.

But rising wages means higher labor costs for businesses, which forces them to raise their prices… which means employees’ wages have less purchasing power. In the end, the government can’t dictate the real value of wages paid to workers. But it can spark a wage-price inflation cycle – something the Federal Reserve has lately been unsuccessful at doing.

In the run up to the 2011 highs in gold and silver, the markets were pricing in the potential for higher inflation rates that haven’t materialized – at least not yet. Now the metals are trading as if the Consumer Price Index (CPI) will never get back above 2%. 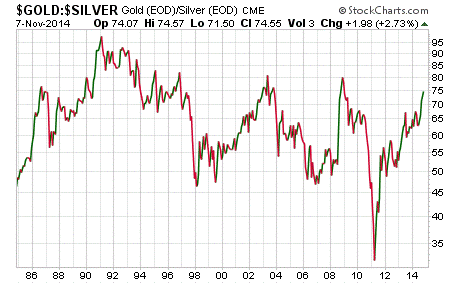 With precious metals prices beaten down, it may be time to be a contrarian. That’s the advice of metals analyst David Smith. In our interview with him in our latest Market Wrap Podcast, he said, “Try to be a contrarian and when the market is really lopsided, when everybody’s on one side of the boat, then that’s when you want to take the other side of the position.”

The silver to gold ratio plunged last week to its lowest level since 2009. The silver price got down to 1/75th the gold price. Expressed inversely, the gold to silver ratio rose to 75 to 1.

Back in spring 2011, we suggested an opportunity to switch out of silver and into gold (or favor gold over silver for new purchases) after silver had gained dramatically against gold and the gold to silver ratio fell into the low 30s. Today, an opportunity exists to switch gold for silver. (All customers that do such a transaction with Money Metals Exchange will receive free shipping on their silver.)

Silver prices have the potential to close the gap with gold even more than they did in 2011. There is plenty of historical precedent (and good fundamental reason based on current supply ratios) to suggest the gold to silver price ratio can narrow to 20 to 1 or perhaps even 10 to 1 during the next great silver upcycle. But even a return to the 2011 ratio low point of 33 to 1 would result in a 56% reduction from the current ratio in silver’s favor.