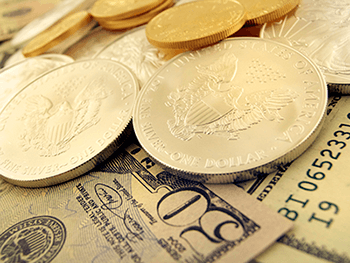 Much to the chagrin of the financial elite, gold and silver are reentering the American consciousness and starting to shake the wing nutty image of their recent past. But it’s taken a global financial crisis to get the public’s attention – one that could wipe out our nation at almost any moment.

The U.S. government’s role in the economy is on a seemingly interminable upward trajectory. The government’s official debt balance that just crossed the $18 trillion mark (with additional unfunded liabilities estimated at more than $100 trillion). Half the population now lives in households that receive government payments.

Even as private sector jobs disappear and workforce participation rates languish near generational lows, the corporate sector is seemingly thriving. Corporate profits as a percentage of the economy are at record highs. Fortune 500 corporations are using cash hoards and cheap financing – not so much to invest in capital assets or business expansion, but to buy back their own shares and send their stock prices higher.

All these dangerous excesses and distortions are made possible by our free-wheeling fiat monetary system.

What’s occurring now – endless proliferations of paper flowing into the Treasury and banking sector from the central bank – is precisely the sort of thing our Founding Fathers sought to prevent.

Stay informed with our FREE Precious Metals Market updates and newsletter. Join over 425,000 other savvy investors!

The United States Government and Money

The Coinage Act of 1792 authorized the minting of the nation’s money. It defined a “dollar” in terms of a specific quantity of grains of silver (equivalent to about three-fourths of an ounce). Few people today even realize that the dollar bills in their pocket were originally intended to be silver.

The de-monetization of silver was effectively complete in 1965, when the U.S. Mint ceased producing dollars, half dollars, quarters, and dimes containing 90% silver (from 1965 to 1970, half dollars contained 40% silver).

Of course, you can still buy junk silver online. They are priced based on the current value of their silver content, plus a small premium. You can even use them as money in legal barter transactions.

The last real link the U.S. still had to sound, Constitutional money was finally broken in 1971, when President Richard Nixon suspended gold convertibility. Henceforth, no foreign government could redeem their dollar reserves for gold.

Total credit market debt comes in at an astonishing 330% of GDP – and that’s off from its peak in late 2008. Since the 2008 financial crisis, the Federal Reserve has been waging a battle against credit market deflation, which is the market’s way of unwinding a credit market bubble. The Fed has bought more than $4.3 trillion worth of bonds and tried to reignite a financial bubble in the stock market by holding rates at ultra-low levels. 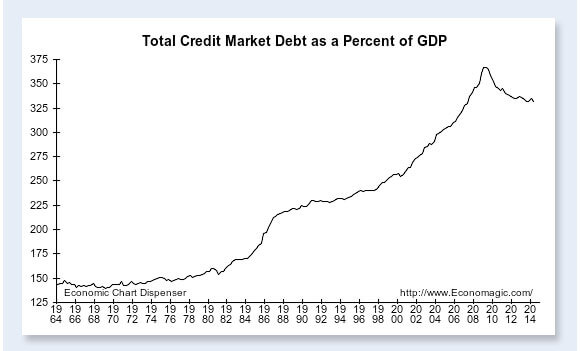 Ironically, the promulgators of this financial madness will often try to portray advocates of hard money as loony! Yet under a gold standard, we had stable price levels, a more restrained government, and less severe booms and busts in financial markets.

Countries Around the World Want Their Gold

The movement to return fiat currencies to sound monetary assets has gained momentum in recent years. On November 30th, Swiss voters went to the polls to decide on a referendum to force Switzerland’s central bank to dramatically boost its gold reserves. (The Swiss franc had been the last remaining major country to operate on gold standard until 1999, when the franc went fiat.)

The “Save Our Swiss Gold” referendum failed. Even so, other countries in Europe are eyeing gold as a monetary asset.

The Dutch central bank in November moved a fifth of its 612.5 metric tons in gold reserves from the Federal Reserve Bank of New York back home to Amsterdam. “The Dutch Central Bank joins other banks that are keeping a larger share of their gold supply in their own country,” the central bank said in a statement.

France may soon make a similar move to repatriate its gold reserves. The leader of France’s largest opposition party, the National Front, called on the French central bank to take full possession of its gold held abroad and called for an independent audit of the country’s gold reserves. 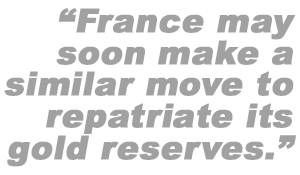 A member of the European Central Bank Executive Board, Yves Mersch, recently gave a speech discussing the potential benefits of the ECB buying real assets, including gold.

What Will the Future Hold for Gold?

Sound money efforts are spreading in the U.S. at the state level. Earlier this year, Oklahoma joined Utah, Texas, and Louisiana in passing a legal tender law that removes state taxes on transactions made with gold and silver coins. These states have asserted their power under Article I, Section 10 of the Constitution to recognize gold and silver as legitimate currency alongside the dollar. Similar legislation is now under consideration in several other states.

Granted, it seems unlikely that the U.S. or any major country will return their currency to a classical gold standard anytime soon. But signs abound that precious metals are re-entering the public consciousness – and will be playing a more prominent role in monetary systems as geopolitical tensions rise, debt levels become more unmanageable, and public confidence in political institutions wanes.