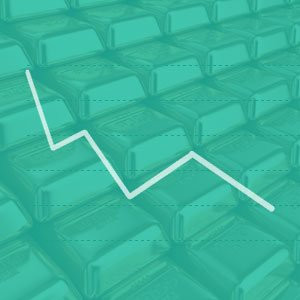 The Federal Open Market Committee (FOMC) introduced the notion that the timing of interest rate hikes will be tied to price inflation. With CPI currently well below their 2% - 3% target (and falling), Federal Reserve officials told us they can afford to be "patient." The dovish announcement helped inspire the best 3-day rally in U.S. stock prices since 2011.

A growing currency crisis in Russia also failed to incite buying in the precious metals futures markets -- at least so far. The Russian central bank dramatically increased interest rates overnight on Dec. 14th in an attempt to stop the slide in the ruble.

Looming price increases sparked consumers' "panic-buying [of] furniture and cars" to convert their rubles quickly into something tangible. Russians are also buying something else aggressively -- physical gold and silver, which represents true money and has since the beginning of time. (Be sure to take a look at the chart below showing the price of gold in rubles!) It remains to be seen whether the interest rate hike will be sufficient to shore up the ruble.

The action in Russia makes the U.S. dollar look even stronger on a relative basis, despite the dollar bearish announcement from the FOMC. The DXY index rose a little over 2% last week.

Crude oil costs about half what it did in July. That is a profound move in the world's most widely traded market, and the impacts will be playing out in world economies over the months to come. Some, such as lower gas prices, will be predictable. Many won't. The precipitous fall of the ruble is perhaps the first major surprise.

The Russian central bank hiked interest rates from 10% to 17% just over a week ago. We'll find out if that will be enough to entice savers to hold the ruble, or if the dumping will continue. The currency recovered much of its early losses. But with lower oil profits pouring into government coffers, the Russian currency looks like a far riskier bet. And should crude prices move significantly lower from here, selling of the ruble may spiral out of control.

The hyperinflation scare in Russia highlights the importance of holding physical precious metals, of course. Any Russian who traded rubles for gold before the collapse was well rewarded. The gold price is up about 40% versus that currency since November 1st.

Unfortunately, investors holding gold in the U.S. got punished by the Russian crisis – at least in the short run. The gold price fell in U.S. dollar terms last week. The sharp selling in rubles translated to heavy buying in the dollar. The stronger dollar prompted traders to sell dollar-denominated gold contracts, forcing the gold spot price lower.

So traders who focus on spot prices received a signal to sell gold and buy dollars. If that sounds bizarre, it is. Buying dollars because some other nation's fiat currency is in free fall would imply confidence in the dollar – something we believe is completely unwarranted… at least for anyone who isn't an experienced, nimble futures trader making a short-term move.

The lesson for the rest of us is the same one the Russians received: reduce your exposure to paper currency by swapping for tangible assets. Confidence is ephemeral and can shift quickly.

Today, the currency markets are paying attention to these sharply lower oil prices and the impact on the solvency of Russia's government. Tomorrow, the spotlight could easily shift to U.S. debt and entitlement obligations. Although Russia does not have America's luxury of imposing the consequences of its fiscal irresponsibility on other nations (via the world's reserve currency), Russia is arguably far more solvent than we are.

It's risky to hold large amounts of any fiat currency, including the dollar, even if that isn't the signal we get from spot prices.