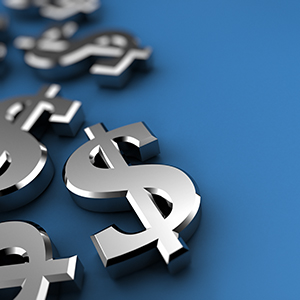 It’s the same technique that Navinder Singh Sarao used to facilitate the Flash Crash of 2010, which plunged the stock market 600 points in a matter of minutes. Layering is remarkably simple: traders merely place tremendous amounts of orders and then cancel them just before they’re processed. But not before those unfilled orders began to move the market. Nearly anyone could do it.

The mere fact that the two traders – foreign nationals operating from the Middle East no less – were able to spoof the market years after Sarao was prosecuted for using the same technique demonstrates once again that the Commodity Futures Trading Commission isn’t serious about protecting pure price discovery. In fact, there’s a preponderance of evidence that the CFTC has allowed price rigging on a much larger scale for decades.

Consider the following chart from Casey Research, which demonstrates the discrepancy between intraday gold prices when American markets are open and when they aren’t: 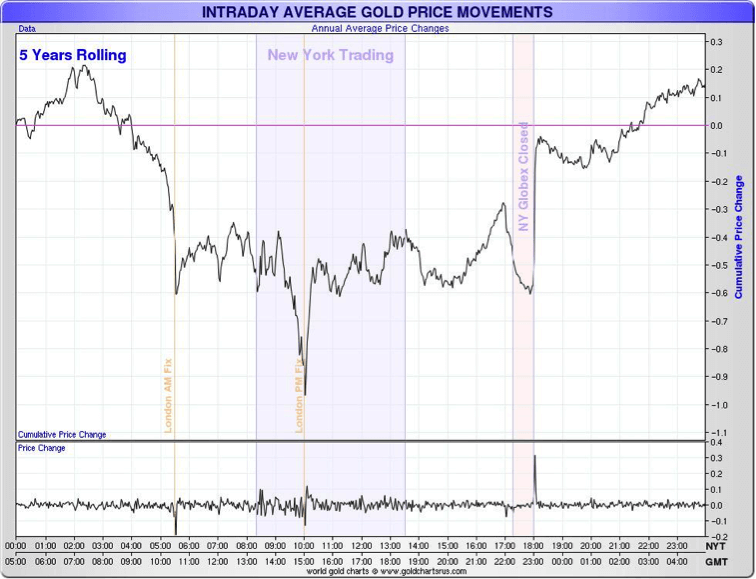 As you can clearly see, prices tend to be lower when U.S. markets are open than any other time of day. This pattern has held since at least 1970.

Now, using another chart from Casey, let’s consider how this has affected bullion investments on a macro scale. The yellow line is the price of gold. The blue line is the LBMA Intraday Gold Fix Index: 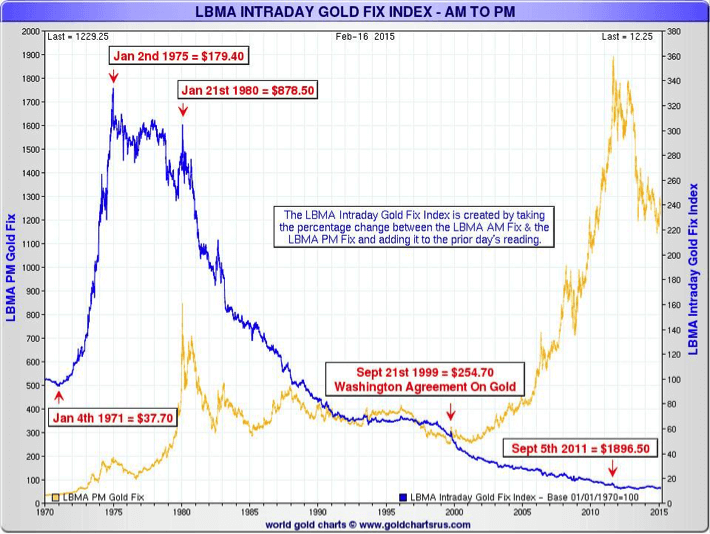 This chart demonstrates that, if you had invested $100 in 1970 at the London AM gold fix, sold your position at the London PM gold fix the same day, then reinvested the proceeds the next day and repeated the process every trading day for the next 45 years, you’d have just $12 in your account today. On the other hand, if you had simply owned gold bullion without trading, your $100 in 1970 would now be worth well above $2,000 today.

In other words, there’s been a HUGE negative price bias when Western markets have been open – particularly during the hours in which the CME has been operating. Since 1975, the bias has remained consistent regardless of the price of gold or price trends. This suggests that the CFTC has allowed tremendous collusion to suppress the price of gold during the CME’s hours of operation. Conversely, precious metals prices soar in Asia when Western markets are closed.

Collusion on this scale, which Germany’s top financial regulator Elke Koenig has called "potentially worse than the Libor scandal," can only be accomplished by a cabal of firms of tremendous size and power: investment banks.

Indeed, 10 major investment banks are being investigated by the Justice Department for colluding to rig precious metals prices. Not surprisingly, this same group of banks spends tens of millions of dollars annually on lobbying, and, in return, has enjoyed tremendous influence over the CFTC (including implicit permission to rig prices for 45+ years).

The Commission, for example, recently fined JP Morgan just $650,000 for years of data falsification on the CME. And it fined 6 of the 10 aforementioned banks a paltry average of $550,000 each for years of rigging foreign exchange rates!

The power of investment banks over the Commodity Futures Trading Commission appears impressive.

One CFTC whistleblower, Judge George H. Painter, claimed in his retirement letter that a colleague of his, Judge Bruce Levine, promised former CFTC Chair Wendy Gramm that he would never rule in a complainant’s favor against a Big Bank. In more than two decades presiding over investor complaints with the CFTC, Judge Levine has, in fact, never ruled in favor of a complainant!

Now, back to Khara, Salim, and Sarao manipulation.

These three traders were busted because their layering technique required them to place and subsequently cancel tens of thousands of orders at once. The volume of the cancellations raised yellow flags.

Now, consider the difference between the actions of these 3 traders and those of investment banks working in concert. Through large numbers of individual traders, they have the ability to move entire markets with no individual account making enough trades to raise suspicion. The aggregate of tens of thousands of traders from a handful of investment banks making a few hundred trades a day each has far more potential to manipulate prices than the individuals Khara, Salim, and Sarao did with the 30,000 or so orders they each placed to suppress the market.

CFTC-enabled investment banks who may also in some cases act as agents of central banks, not rogue traders, pose the greatest threat to the purity of price discovery. Busting rogue traders is merely political theater that distracts the public from the much larger issue of manipulation by the Western central bankers and governments themselves.

Perhaps the shoddy treatment gold and silver receive from Western financial powers is a reason bullion is flowing out of depositories in Europe and America and into vaults in Asia. Gold goes where it is most adored.

Seth Mason is a free-market economics and political commentator for Money Metals Exchange. His writings promote the ideals of economic strength and stability, sound money, equality of opportunity, and reduced government debt. Seth heads the Solidus.Center which works to expose the Federal Reserve, has a publishing background, and holds an MBA from the University of Georgia.