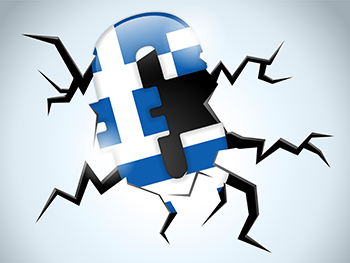 Marked by a 6-day bank and stock market closure, the long road to official default in Greece is about to reach its end.

Creditors, including the International Monetary Fund (IMF), the European Commission, and EU central bank no longer stand willing to loan Greece the funds needed to maintain the flimsy illusion of solvency. It appears the epic game of kick the can is over – the troika of lenders will stop sending Athens the money that Athens needs to continue making loan payments to the troika.

Markets worldwide will be sorting through fallout this week as the Greek default and potential ouster from the EU moves from speculation to reality. Gold and silver prices enter the week near the lower bounds of recent trading ranges.

For Greece, the can-kicking ended suddenly on Friday. Greek Prime Minister Alexis Tsipiras declared his coalition could not accept the creditors’ proposal and called for a national referendum.

Eurogroup officials announced they are unwilling to extend financing past tomorrow, and the referendum on the creditors’ proposal is not until Sunday, July 5.

The Greek government will miss repayment of $1.7 billion it owes the IMF by month end. This official default represents a trigger event for loan covenants and derivatives such as credit default swaps. The ramifications in these opaque markets will be hard to predict.

On the other hand, there are ramifications for Greek banks and depositors, both obvious and immediate. Over the weekend, the European central bank declared it will not provide additional Emergency Lending Assistance – meaning liquidity – to Greek banks trying to keep up with withdrawals.

The Athens government moved quickly to declare a bank holiday. Both the banks and the Greek stock exchange will be closed for at least a week. ATM withdrawals are now limited to 60 euros a day, and citizens are hoarding gas and groceries.

Anyone with the misfortune of having funds still on deposit or assets in brokerage accounts must await their fate. Cyprus-style bail-ins and haircuts are virtually assured as the destitute Greek government confiscates what it needs to maintain itself and support the banks.