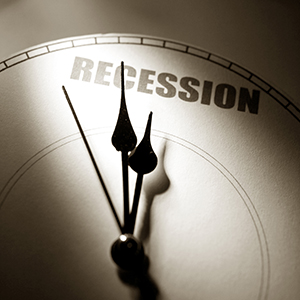 Federal Reserve chair Janet Yellen may have missed her window of opportunity to raise interest rates. The economic data no longer paint a picture of even a tepid recovery. Since the start of the year, key indicators for the economy began pointing toward recession.

Add to that the recent Eurozone chaos surrounding the Greek default and a 30% crash in the Chinese stock market, and economic pressures are growing by the day.

There can be little doubt the U.S. economy is headed for more trouble. Consider these ominous signs:

The odds of the U.S. economy entering a recession are growing, to say the least.

We may, in fact, already be in a recession.

A recession will only be confirmed officially by retrospective data.

And that comes out months later – when it may be too late for inpiduals, businesses, and investors to make financial preparations.

Is a Bad Economy a Threat or an Opportunity for Precious Metals Investors?

Therefore, gold is normally the preferred metal to hold during a recession. Gold demand tends to be relatively durable and can even increase counter cyclically to the economy, as investors seek safe havens.

Silver demand is more heavily weighted toward industry (silver is used in electronic devices, solar cells, and many other manufactured products). So silver prices are more vulnerable to cyclical downturns in manufacturing.

Yet silver prices have been in a downtrend since 2011. Silver has already suffered the sort of price drop (more than 65%) that a severe recession could be expected to bring.

Silver has also already lost a lot of ground relative to gold. The silver:gold ratio has plunged from 1:33 to 1:77 over the past four years. Silver is now only 1/77th the price of gold, whereas the classic price for silver as money on a bimetallic standard is 1/16th the price of gold.

The odds of the U.S. economy entering a recession are growing, to say the least. We may, in fact, already be in a recession.

A recession will only be confirmed officially by retrospective data. And that comes out months later – when it may be too late for inpiduals, businesses, and investors to make financial preparations. 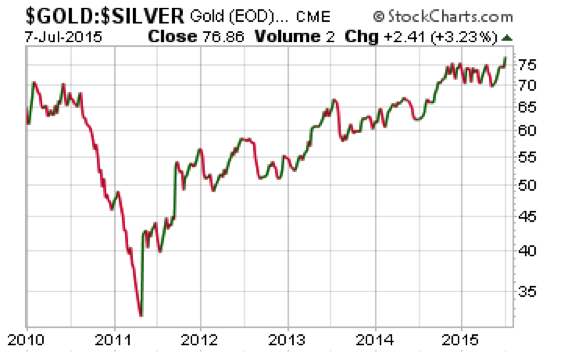 On a historic basis, silver is an incredible bargain now. Both in terms of gold and in terms of dollars. Could silver be primed to rebound even as the economy appears to be teetering?

There is certainly precedent for silver performing well as an investment during recessions.

In fact, the very best economic environment for silver (and other precious metals) is an inflationary recession. This is also known as stagflation – characterized by that misery-inducing combination of economic stagnation, high unemployment, and high inflation.

The last great mania in precious metals occurred during the stagflation of the late 1970s – a period during which stocks traded sideways in nominal terms and experienced deep losses in real terms.

Will the Fed Raise Rates and Does It Even Matter?

The 1970s also saw sharply rising interest rates – something that appears unlikely to transpire in the current economic environment. If the economic numbers confirm a slowdown, the Fed will have difficulty justifying any rate hikes. An increase in the Federal Funds rate later this year is still widely anticipated by investors, so if the Fed backs off, the markets will move.

But, as financial intelligence advisor Jim Rickards noted about the Fed in his recent interview on the Money Metals podcast, “They don’t know what they’re doing… This is one big science experiment.”

Lofty stock valuations have been supported by the Fed’s easy money and the belief in underlying economic strength. The prospect of the Fed being afraid to follow through on its telegraphed rate hikes due to deteriorating economic fundamentals doesn’t necessarily bode well for stocks.

It would bode well for precious metals, though, at least on a relative basis.

Metals prices won’t really take off until inflation fears rise. Inflation pressures can build even during a recession. Inflation, as Milton Friedman noted, is a monetary phenomenon.

The Federal Reserve ultimately needs to engineer a higher rate of inflation in order to reduce at the real value of the government’s $210 trillion long-term fiscal gap. And when the Fed “succeeds” it will likely have trouble containing its “success,” as money velocity picks up and inflationary psychology feeds on itself.

Last year, we saw inflation rates spike in the collapsed economies of Russia and Ukraine as the public lost confidence in their respective national currencies.

The much larger U.S. economy probably won’t deteriorate as dramatically or see the dollar crash as suddenly. But investors shouldn’t delude themselves into believing that America is immune from future turmoil that hits the economy and spreads to the currency.