China’s recent stock market gyrations have some analysts now calling China the biggest bubble in history. But those who write off China because of market volatility are missing a more important long-term trend of Chinese geopolitical and monetary ascendancy. That trend shows no signs of abating.

China’s leaders have a clever strategy, and Western financial powers may someday wake up in shock when they realize what has occurred.

It’s true that the Chinese government has helped fuel artificial demand for property and equities. China skeptics who argue that these artificially inflated markets will crash to much lower levels could well prove to be correct. Some China doubters also argue that a downturn in China’s economy will put downward pressure on commodity prices.

Commodities – from crude oil to copper to gold and silver – have already suffered a severe cyclical downturn. Commodity markets tend to be leading indicators, moving in advance of whatever economic story of the day the financial media are telling.

But single-day drawdowns of more than 8% in the Chinese stock market this summer certainly caused some forced liquidations of precious metals positions.

The very fact that booms and busts in China’s markets and economy can now exert heavy influence in globally traded markets such as commodities proves the point that China’s influence isn’t on the wane. Not by a long shot. Even if China’s double-digit rates of growth in the early 2000s prove fleeting and never return, China’s economy still remains on track to eclipse the U.S. economy in the years ahead as the world’s largest.

Chinese officials aim to ultimately to challenge the America’s standing as the world’s superpower. That’s why they’re forming a strategic alliance with Russia, an adversary of the U.S. That’s why both the Russian and Chinese central banks have quietly emerged as the world’s largest gold buyers.

In July, the People’s Bank of China reported that it has added more than 600 tons of gold bullion to its stockpiles since 2009, taking the total to 1,658 tons. That represents a 60% jump in gold assets in just six years.

In fact, all of that new metal was added to central bank’s ledger in June 2015.

With gold prices down in June, there's no way the actual buying had occurred then. It appears central bank officials simply moved that metal over from the books of China's state-owned banks which can hold metal secretly.

So that’s just what the Chinese are reporting officially.

Unofficially, according to MarketWatch columnist David Marsh, “China probably has a lot more gold than it admits.” That’s because the Chinese government regularly acquires gold directly from China’s mining industry.

The transactions are settled in yuan rather than dollars, so most or all of these “internal” gold purchases can avoid showing up as foreign reserve assets.

In examining gold flows into China as well as Chinese gold production, some experts believe that China actually holds more than 10,000 tons of gold, not the “paltry” 1,658 tons the People’s Bank of China is disclosing.

China Has an Incentive to Understate Its Gold Hoard

It makes logical sense that China would understate its gold aspirations. If you had the means to acquire hundreds, or even thousands, of tons of gold, you’d want to do so as stealthily as possible in order to avoid tipping off the market.

If your strategic objective was to dramatically boost gold reserves over a period of several years, you wouldn’t want to see the price rise – at least not while you’re still accumulating. And if you had no ethical qualms about interfering in the market, you’d want to rig prices lower so you could obtain more ounces.

Chinese officials are more than willing to manipulate markets, whether through subterfuge, deceit, or outright force. Recently, in an effort to prop up the stock market, they tried to forbid people from selling shares of stocks. How heavily involved China is in managing the gold market is impossible for an outsider to know.

But there is plenty of evidence to suggest that China is covertly buying gold while dumping U.S. Treasuries. JP Morgan analyst Nikolaos Panigirtzoglou calculated that China’s foreign exchange assets got depleted by $520 billion over the past five quarters. Most of that $520 billion in paper asset dumping comes, presumably, from China’s massive holdings of Treasury securities. 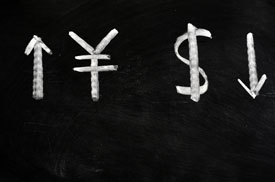 If China continues to unload U.S. bonds at a feverish pace, the Federal Reserve might be forced to launch a new bond-buying campaign. That, in turn, would diminish the credibility of the U.S. dollar as China seeks inclusion of its yuan into the International Monetary Fund's Special Drawing Rights (SDR) currency basket.

As Reuters reported, China “is pushing for the increased use of the yuan for trade and investment as part of a long-term strategic goal to reduce dependence on the dollar.” The yuan’s ascendancy to the status of a top-tier SDR currency would go a long way toward making the Chinese currency a serious global competitor to the U.S. dollar.

However, if it were known that China actually had 10,000+ tons of gold on hand, other countries would more likely balk at China’s pending petition to join the International Monetary Fund’s exclusive SDR club. (A decision is expected this fall.)

China’s gold-accumulation strategy will go a long way toward making China more independent of the dollar and other fiat currencies.

If you actually believe what the People’s Bank of China reports as its gold reserves, then it has a long way to go to catch up with other countries. While China’s official stash is the world’s sixth largest in absolute terms, it ranks much lower in relation to its economy and its total foreign reserves.

Whether it owns 1,658 tons or upwards of 10,000 tons, China’s appetite for gold is far from being satisfied. The Chinese government will continue to buy, both officially and unofficially.

China may never establish a model sound money system; nor is that its goal. China simply appreciates the universality of gold. And, as the saying goes, “gold goes where it’s most appreciated.”

Whether you’re a Communist or a capitalist, whether you speak Mandarin or English, gold remains the one permanent, immutable common denominator. Gold’s value has been recognized universally for hundreds of years and will continue to be recognized universally regardless of whatever market gyrations or economic or political strife the future may bring.