Demand for Government–Minted Coins Is a Barometer 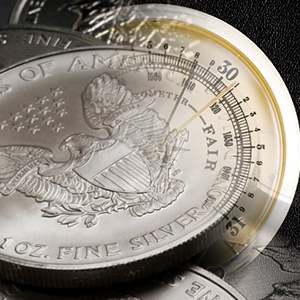 Many Internet discussions of government coin sales conclude: “High coin sales volume is not big a deal because they account for such a small percentage of total supply.” That’s only partially true.

Yes, coins account for a relatively small percentage (~14%) of total supply. However the volume of coin sales is indeed significant, for several reasons…

And after the 2008 episode, many more people “woke up” to the idea that precious metals are a nonrecourse way of owning real money without interference. Even with the “recovery,” the demand for silver of this type (government-minted coins) has only increased. Again, interesting?

Could demand double again? Certainly if you consider the global economy is in a more dangerous place relative to 2008. More debt that cannot be serviced based on oil production revenue that no longer exists, monetary inflation flowing into the banking sector, economic malaise worldwide leading to insolvent governments, and the rampant debt accumulation across the board.

Thus, if government-minted silver coinage were to double the 2014 numbers, it would imply a rise in total demand to over 140 million ounces. That would be a significant increase and could cause prices to rise (at least in a market absent of intervention).

Furthermore, because we don’t know how tight the silver market actually is – the demand needed for the physical market to overtake the paper market could be a modest amount. Markets respond to changes at the margins, and the last ounce sold at a given (low) price could be enough to see the price of silver gap up significantly.

If we follow the logic, an investment by a modest sized fund could potentially be the trigger that causes the price of silver to skyrocket.

Many precious metals investors are unaware of the details of the Chinese physical markets. While gold deliveries occur at major exchanges, the majority of silver taken for delivery occurs on much smaller, domestic exchanges which aren’t required to report deliveries. Examples are the Shanghai White Platinum and Silver Exchange, among others.

But even if we just focus on the major exchanges – i.e. the Shanghai Gold Exchange and Shanghai Futures Exchange – silver delivered from the exchanges is not considered in the investment demand numbers reported in the GFMS Silver Survey and the CPM Silver Yearbook. Those not familiar with these exchanges might thing they are excluded, because they are in commercial bar form and because both studies exclude commercial bars from investment demand.

But what is so surprising is this: The silver taken for delivery isn’t in commercial bar form (1,000 oz. +/-). On the Shanghai Gold Exchange a market participant can take delivery of either 1 kilogram (32.15 oz.) or 15 Kilograms (482.25 oz.). Shouldn’t this also be considered investment demand?

That brings us to investment demand involving one to 100 ounce bars and rounds throughout the rest of the world. In 2014, physical bar investment in India alone was 66.8 million ounces. If you add in North America, it’s over 100 million ounces.

You can find silver bar dealers in your area, or online for when you're ready to purchase them for investment.

It may seem that retail demand for government-minted coins combined with privately minted bars and rounds may not be making much difference. It may continue to seem not to matter until it does. That, my friends, is the moment when the physical market will reassert control over the global price of silver.

Chris Marchese is the Senior Equity and Economic Analyst for The Morgan Report. He is co-author of The Silver Manifesto available on Amazon with the electronic version available across the web. He holds advanced degrees and worked as an equity analyst for a major Wall Street firm before becoming independent where his views would not be censored.