Is the Retail Metals Market Headed for 2008-Style Shortages and Premium Spikes? 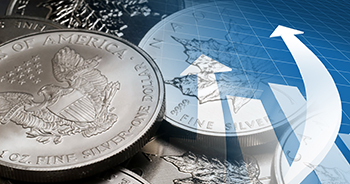 Demand for silver bullion is outstripping the ability of mints and refiners to supply, and the recent volatility in stock markets is compounding the problem. Yes, it’s getting “interesting-er” and “interesting-er” by the day!

Demand spiked in late June when investors began worrying about events in Greece and the collapse in Chinese equities began. Now we're seeing another wave of buying based on the turmoil here at home. On top of it all has been additional demand from bargain hunters taking advantage of lower spot prices.

The Royal Canadian Mint is currently furthest behind. Two weeks ago, they admitted to significant production problems and have nearly halted sales. As a result, Money Metals Exchange stopped taking new orders for Maple Leaf coins. We won't make delivery promises to customers we aren't sure we can keep.

Supply of silver American Eagles isn't in much better shape. The U.S. Mint’s rationed supply to dealers came in way below what was anticipated. Lead times for delivery moved out once again, and premiums rose; but we are still accepting orders – for now. We’ll be looking for today’s announcement of just how little the dysfunctional U.S. Mint plans to ration out this week.

Currently, the best option for purchasing silver coins is the British Britannia and the Australian Funnel Web Spider. Both still offer modest premiums and immediate shipment.

One thing’s for sure -- these higher premiums and delays in sovereign coins are ramping up pressure on private mints and refiners who produce rounds and bars. The Sunshine Mint is quoting extraordinary delays on delivery on rounds and bars – no new orders shipped until late October! Premiums on Pre-1965 U.S. silver coins hit the $6 range -- 40% over spot. (If any customers wish to sell us their junk silver, we’re currently paying nearly $4 over junk silver at spot!)

At this point, acquiring 1,000-ounce silver bars is the only way to get both immediate delivery and super low premiums in silver. Larger investors should call a Money Metals Specialist at 1-800-800-1865 to discuss options. 1,000-ounce bars are particularly attractive if you also choose to store the bars at Money Metals Depository rather than have them sent to you directly.

Inventories of gold coins and bars remain in better shape. Gold American Eagles, Maple Leafs and other sovereign coins are available and shipping promptly. One-ounce gold bars carry a one-week delay. Despite rising demand, premiums are stable – at least for now. Reduced availability and higher premiums in silver are incentivizing buyers to switch to gold.

Silver buyers trying to capitalize on low spot prices and get fast delivery may be having some troubles, but conditions are currently better than in 2008.

Leading up to the financial crisis and during the following months, delays were often measured in months, not weeks. And premiums as a percentage of spot prices were even higher than they are today on many products.

The question is what happens from here. Three days ago, analyst Steve St. Angelo appeared on the Money Metals podcast and outlined some alarming scenarios for both silver supply and demand.

Whether or not the situation St. Angelo described ultimately plays out, there will need to be an extended reprieve in retail physical demand for mints and refiners to catch up on the lengthy production backlog. That scenario will likely require precious metals spot prices to stabilize. (Price movement in either direction tends to stimulate buying.)

Perhaps more importantly, a reprieve will also require diminished safe-haven interest in physical metal. If stock markets, both here and abroad, can stabilize in the coming months, we will see some slack in the rush to buy. The Chinese government is going all-out to curb selling in their stock markets. And Fed officials may decide to punt once again on the rate hike that U.S. equity investors seem to fear so much.

We may see markets stabilize, but don’t bet on it. Recent volatility is hinting that markets are on edge, whether it be equities, oil, bonds, currencies, or precious metals. It could only take a few headlines to trigger an investor stampede.

There is no certainty that the Chinese officials will be able to control the sell-off in stocks. They have been doing their best for two months now, without much luck. U.S. equity markets also still look vulnerable. Consider the following chart, which shows rising margin debt relative to GDP (from Jesse’s Cafe Americain): 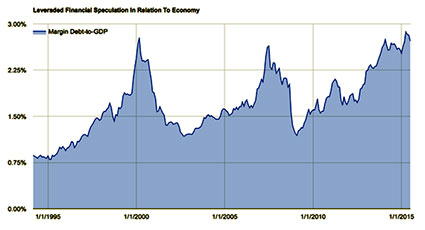 Speculators are leveraged to the hilt, and history shows trouble just ahead when borrowing on margin reaches today’s extremes. The coming month could be “exciting.”