Keeping an Eye on Bullion Supply and Demand

A lot is riding on the demand side of the equation when it comes to metals' price performance this year. Demand is the bigger wildcard with signals thus far being mixed in gold and silver bullion markets. The outlook for supply is more certain, and it isn't pretty.

Endeavor Silver, one of the largest primary silver mining companies, announced last week that it expects to reduce production of the white metal by roughly 30%. The company's El Cubo mine is not profitable despite efforts to reduce costs. Endeavor plans to halt development and exploration at the mine and process accessible ore only. By year end, the mine will be placed on “care and maintenance.”

Steve St. Angelo of SRS Rocco Report reviewed the company's third quarter 2015 financial reports, which revealed the all-in sustaining costs at El Cubo at $18.48 per ounce. There will need to be a significant recovery in silver prices before the mine can operate profitably. Investors should expect other miners to announce similar plans to taper production in the coming months.

The drop in COMEX inventories of gold and silver may also contribute to supply problems in the bullion markets. Registered gold inventories had recovered very modestly from record low levels in December. However, last week stockpiles dropped an alarming 73% in a single day. 201,345 of the available 275,325 ounces of registered gold were reclassified from registered to eligible on Tuesday, rendering those ounces unavailable for delivery – at least until converted back. COMEX silver inventories also continue to fall. 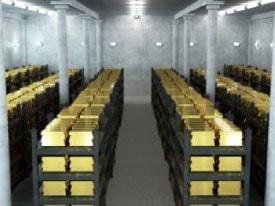 It is true the declining inventory of registered metal isn't necessarily a problem. Holders can very easily switch metal from one category to the other. But registered stocks of gold have never been this low, and certainly have never held this low for such an extended period of time. We may be seeing a genuine reluctance among holders of COMEX metal to let more go at current prices.

On the demand front, the data is conflicting. Bullion dealers, including Money Metals, are reporting relatively subdued buying activity compared to several months ago. Investors loaded up last summer and during early fall and now appear to be waiting for the prices to make a move. Range bound prices aren't providing much motivation to act.

However, the month of January was extraordinary when it comes to demand for silver and gold American Eagles. The U.S. Mint sold nearly 6 million silver coins in the month. It was 7.7% increase versus January 2015 – the prior record. Sales of gold Eagles hit 124,000 compared to 81,000 ounces a year ago – a 50% jump year over year.

Our sources indicate the demand is likely a result of dealers replenishing inventories which were hard hit in recent months. And there is another little-known reason...

Direct purchases from the U.S. Mint for Silver Eagles remain high because Authorized Purchasers (APs) have been reluctant to take anything less than their full allotment for fear of losing some ability to obtain supply when demand returns.

Last summer and fall the APs were left scrambling for Silver Eagle inventory when soaring physical demand depleted stockpiles at the wholesale and retail levels. That resulted in long delays and increased premiums for the world's most popular silver bullion coin.

Therefore it makes sense for wholesalers to stock up on Eagles now while they can get their hands on them and save them for a rainy day.

There may also be some large scale buying on behalf of bullion banks. Some analysts, including Ted Butler, speculate that institutions such as JPMorgan Chase began building positions in the popular coins last year.