Market Rigging Is Getting Out of Hand, but Gold and Silver May Be Unstoppable Now

Michael Rivero of WhatReallyHappened.com pulled no punches in his Money Metals interview which aired last Friday. Here is an important excerpt:

“Unfortunately we're seeing a lot of manipulation and rigging in the paper markets, and governments are looking the other way because they're trying to make everything look good, especially here in the United States during an election year. 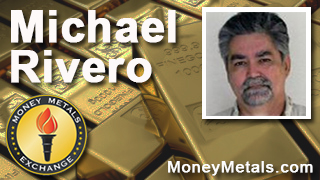 “We're just finding out now that the investigation into that five-trillion-dollar-a-day Forex rigging scandal in Britain has now been dropped. They admit they found evidence of criminality, but they're saying, well 'we're not likely going to have a successful prosecution, so we're just going to let them get away with it.'

“And it's reached the point where the rigging is so intense that the normal technical analysis by which investors would predict what the market is going to do is breaking down. And as a result, a lot of small independent investors are already getting out of the stock market, and much of what you're seeing is basically churning between the Wall Street banks and the large corporations flipping blocks of stock back and forth, trying to keep those numbers high. Because if there is a correction, there are a couple of things that are going to happen...

The Look of Gold and Silver...

“First of all, because gold and silver are looking so attractive right now, people are thinking seriously about closing those negative interest rate savings accounts and getting into metals, and the paper equities market and the government are trying to figure out some way to stop that, which is why they're talking now about a cashless society. If there's a correction, people are going to dump their stocks, again going back into metals as a reliable store of value.

“And more importantly, all of these financial institutions that have been part of this plunge protection team since the Bill Clinton administration, they're holding huge blocks of heavily overvalued stocks on their books right now, so they're kind of stuck. They have to do whatever they think it's going to take to keep those stock market numbers up, because if there is a correction, many of those corporations are going to be instantly insolvent overnight, and it's going to make 2008 look like a minor speed bump in comparison.

“So all of these little emergency measures and bailouts and bail-ins and TARP and rigging which were supposed to be temporary emergency measures, they've now become absolute necessities. Wall Street is now addicted to this pattern of fraudulently rigging the numbers.

“One of the most obvious examples, of course, is the continued claim that we only have a 5 or 6% unemployment number when we have 93 million Americans in this country willing and able to work who have not been able to find jobs for years. And the books are cooked by taking those long-term unemployed and putting them into a separate category, and the unemployment numbers are only those people who've lost jobs in the last few weeks, and that's how they make the numbers look good.

"This is an election year, and the incumbents are trying to protect their positions in power, and lying to the public gets them what they want up until the public wakes up and says 'we know we're being lied to, and we're just not going to listen to you any longer.'

“Again, silver and gold are looking good. There has been rigging trying to keep those numbers down in order to keep people in their savings accounts and the equities markets. But there's going to come a point where that rigging simply is not going to be able to work any longer, and people are going to buy into gold because the price is being held down, not because they expect the price to go up, but because they know the price is not going to go down anywhere near as much as the paper markets when there is a correction.”

Mike Gleason is a Director at Money Metals Exchange, a precious metals dealer recently named "Best in the USA" by an independent global ratings group. A graduate of the University of Florida, Gleason has extensive experience in management, sales and logistics as well as precious metals investing. Gleason has hosted a weekly precious metals podcast since 2010, a program listened to by thousands each week.