Friday's disappointing jobs report sets the stage for markets to continue weighing the broader implications this week. Gold and silver prices rose modestly Friday on the increasing likelihood that the Federal Reserve won’t raise rates in June. However, the precious metals still registered losses for the week and have corrected further this morning.

Gold prices traded slightly above the $1,300/oz level last Monday and Tuesday intraday but couldn’t close above it. It appears that $1,300 is, for now, a psychological barrier to gold’s continued advance. Short sellers in the futures markets are keen on defending it. Once cleared, gold could rally strongly on a fresh wave of short covering. 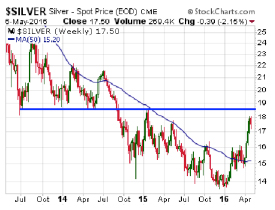 The silver market also neared – but didn’t quite reach – a formidable resistance level last week. Silver broke down below $18.50/oz in mid 2014 and has traded below it ever since. The last time silver tested the $18.50 level, in early 2015, it immediately turned down. Back then it also had to contend with a down trending overhead 50-week moving average.

Today the silver market is on stronger technical footing, having broken out far above the 50-week average, which itself is starting to turn up. The big institutional short sellers will try to defend $18.50 for as long as they can. But if their backs are broken – and that's a big IF in the short term – silver prices could zoom up into the $20s quite rapidly.

For now, silver and gold bulls will have to contend with a futures market that has the “big boys” positioned heavily against them – and those big boys are having another good week so far. On Friday’s Money Metals podcast, precious metals market analyst Craig Hemke talked about the recent explosion in open interest in gold contracts on the COMEX.

“These big banks like JP Morgan, HSBC, Scotiabank, Barclays, UBS, Deutsche Bank, all the bad guys, [are] taking the short side of the trade versus the speculators [who are] taking the long side. And this paper just keeps getting supplied to try to tamp down price as it goes,” Hemke said.

The risk for precious metals investors is that the institutional proliferators of paper contracts could continue to succeed in driving down spot prices in the near-term – especially after such an extended rise in the precious metals so far this year.

Meanwhile, the upshot for gold and silver bulls is that the extreme leverage now being employed in the futures markets exposes just how small the actual physical inventories of gold and silver are in comparison. Leveraged futures traders risk being wiped out if markets don’t go their way. Holders of physical metal can sleep well at night regardless of what happens on the COMEX.

Is this the paper shorts’ last stand? Time will tell.

It’s certainly an interesting (and so far this year, fruitful) time to be owning physical precious metals. With all the record-setting leverage on the COMEX, and with gold and silver spot prices nearing critical must-defend areas for the shorts, we could see some major fireworks in these markets before the Fourth of July.

The Week in Review: Top Headlines